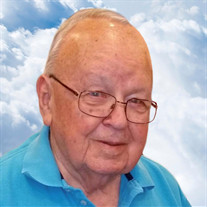 “Everyone has a reason for being in this world, and it’s our job to figure out our purpose and pursue it.” Bill (William) L. Kruzan, beloved husband, father, brother, educator, friend, advocate for children with special needs, and supporter of human rights, passed on Saturday February 15, 2020. Bill was born on March 1, 1930 in Terre Haute, Indiana, the son of Hubert W. and Mary E Kruzan (Beabout). His mother passed seven days after his birth, he was raised by his grandparents Leonard L. Beabout and Anna E. Beabout (Singleton) in Terre Haute, Indiana. He was a 1947 graduate of Wiley High School in Terre Haute. BS from Indiana State Teacher’s College, Terre Haute 1955, MS degree from Indiana State Teacher’s College 1958. Bill did additional graduate work: Michigan State University Lansing, MI, St. Francis College, Fort Wayne, IN, and Ball State University Muncie, IN. Bill was a Korean War veteran who served with Air Force and was stationed in Greenland. Bill married Joan L. Kruzan (Smith) on December 28, 1957 in Lansing, Michigan; she preceded him in death in 2017. They moved to Sullivan, Indiana, later moving to Huntington, Indiana in 1960. Bill dedicated his life to special needs children with 33 years of service in Special Education in the State of Indiana. Bill was the Director of Special Education for Huntington - Whitley Area Programs for Exceptional Children. His inspiration was his brother, Hubert Eugene Kruzan, who lived with severe cerebral palsy. One of the highlights of his life and career was when he received the Herbert D LaMont Award from Pathfinder Services as Director of Special Education in 1987. He was so honored and happy about receiving the award, he proudly displayed the plaque in his room at the Heritage and he spoke about it as recently as this past Christmas. During retirement, Bill continued to advocate for the rights of others. In 2005 Bill supported and fought for the rights of gays and lesbians to be married in his church. He believed in doing the right thing - for everyone - and that love is love. In May 2018 Bill was thrilled when he was invited to join Northeast Indiana Honor Flight #28 to Washington D.C. Bill and his daughter flew out of Fort Wayne and had the time of their lives. Bill enjoyed traveling with Joan, genealogy, going out for dinner, and visiting with family and friends. In 2019 Bill moved to the Heritage of Huntington, where he was very active and thrived. While living there Bill made many friends, enjoyed all the staff, and was touched by their kindness. Survivors include his daughter, Connie Kruzan of Los Angeles, California and her life partner Ed Daley of Las Vegas, Nevada, his sister Susan M. Harris (Kruzan) of Watkinsville, Georgia, niece Suki Janssen (Harris) of Athens, Georgia, niece Amy Harris Reynolds of Chugiak, Alaska, and niece Robin Schofill (Harris) of Jefferson, Georgia, cousin Doris Kruzan of Terre Haute, Indiana, his honorary daughter Debra Ward of Canyon Country, California, and his beloved little dog, Missy, who has a loving new home in Huntington, Indiana. His parents and wife preceded him in death. Visitation will be from 10 a.m. – 12 p.m. Wednesday, March 4, 2020 at Bailey-Love Mortuary, 35 West Park Drive, Huntington, Indiana, 46750. Funeral services will immediately follow at 12 p.m. Wednesday at Bailey-Love Mortuary. Burial will be in Mt. Hope Cemetery in Huntington. Preferred memorials are to Pathfinder Services or Huntington County Humane Society, in care of Bailey-Love Mortuary, 35 West Park Drive, Huntington, Indiana, 46750.

&#8220;Everyone has a reason for being in this world, and it&#8217;s our job to figure out our purpose and pursue it.&#8221; Bill (William) L. Kruzan, beloved husband, father, brother, educator, friend, advocate for children with special... View Obituary & Service Information

The family of William L. "Bill" Kruzan created this Life Tributes page to make it easy to share your memories.

“Everyone has a reason for being in this world, and it’s our...

Send flowers to the Kruzan family.