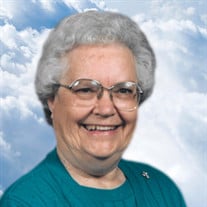 Wanda L. Crago, age 87, of Huntington, died at 12:40 a.m. Tuesday, December 31, 2019 at Heritage Pointe of Huntington. Private services will take place at Bailey-Love Mortuary. Burial will be in Gardens of Memory in Huntington County. Wanda was born on June 4, 1932 in New Hope, Arkansas, the daughter of Robert and Dessie (Greenhaw) Young. She was a 1951 graduate of Dierks High School in Dierks, Arkansas. She married Emerson Crago Jr. on June 3, 1952 in Huntington; he preceded her in death on December 17, 1993. Wanda worked in sales for Stanley Home Products, retiring in 2015 after 50 years of service. She was a member of SS Peter & Paul Catholic Church in Huntington. She also was a member of ABWA and was a Past Matron of the Order of Eastern Star Floral Chapter #75 of Huntington. She is survived by a daughter, Judy (Brian) McCullough of Andrews, sons David (Mary) Crago of Ft. Wayne, Phil (Jan) Crago, Greg Crago, and Brian (Debra) Crago, all of Huntington, a brother, David (Patsy) Young of Dierks, Arkansas, a sister Dorothy (Dennis) Hausman, of Nashville, Arkansas, 11 grandchildren, 21 great grandchildren, and a great-great grandchild. She is preceded in death by her husband, a sister, Lovena Gilbert, a brother, Sherman Young, a grandchild, and a great grandchild.

The family of Wanda L. Crago created this Life Tributes page to make it easy to share your memories.

Send flowers to the Crago family.