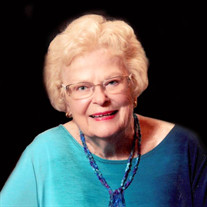 Venice L. “Ven” Endsley age 96, of Huntington, passed away on Monday, June 14, 2021 in Syracuse, IN. “Ven” was born on March 27, 1925 in Kalona, Iowa, the daughter of Dr. August A. and Elizabeth V. (Schmalzried) Wiedenhoeft. Ven graduated in 1943 from Lagro High School, Lagro, Indiana and after graduation she attended Manchester College in North Manchester. She married Robert D. Endsley on October 18, 1944 in Huntington. They shared 62 years of marriage before he preceded her in death on September 12, 2007. Ven was the former Co-owner of Jones & Huntington Abstract Company, Inc with her husband for over 40 years and served on the Board of Directors for a number of Title Companies. She retired in 1979 from First National Bank of Huntington as Vice President for 34 years and prior to that for a short time she worked at Asbestos Manufacturing Company as their payroll officer. Ven was a member of Trinity United Methodist Church in Huntington, she attended Wawasee Lake Side Chapel and Christ Church in Fort Lauderdale, Florida. She enjoyed her lake home in Syracuse in the summer and was an avid bridge player, playing with her bridge groups at South Shore Country Club in Syracuse as well as at Tippecanoe Lake Country Club in Leesburg. During the winter, Ven enjoyed her home by the sea in Fort Lauderdale, Florida. Ven served on many boards and committees. She was the past Regional Vice President of the National Association of Bank Women, the National President if Psi Iota Xi Sorority in 1965 and a member of the Phi Chapter for over 60 years, on the Limberlost Girl Scout Council of Fort Wayne in 1970, the Huntington United Way and Salvation Army Board of Directors, Trinity United Methodist Board of Trustees, the past President of Indiana Sorosis Club, and also the past President of Fort Lauderdale By-The Sea Women’s Club in 2002-2003. Ven was listed in “Who’s Who of American Women” in 1967. Survivors include her sister-in-law, Betty Johnston of Huntington; nephew, Mike Nichols of Indianapolis; and several nieces and nephews. Ven is preceded in death by her parents and five brother – Harold, Arthur, Virgil, Victor, and Everett Wiedenhoeft. Family will receive friends 10 a.m. – 12 p.m. on Thursday, June 24, 2021 at Bailey-Love Mortuary, 35 W Park Drive, Huntington, with the funeral service following at 12 p.m. Thursday, June 24, 2021 at Bailey-Love Mortuary with Pastor Harlan Steffen as officiate. Entombment will be at Gardens of Memory, Huntington County, Indiana. Those desiring, may make memorial contributions to Trinity United Methodist Church of Huntington, in care of Bailey-Love Mortuary, 35 W Park Drive, Huntington Indiana 46750. Please sign the online guestbook at www.baileylove.com. Bailey-Love Mortuary was honored to serve the Family of Venice L. “Ven” Endsley.

The family of Venice L. "Ven" Endsley created this Life Tributes page to make it easy to share your memories.

Send flowers to the Endsley family.