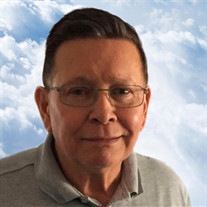 Thomas Richhart, 68, passed away on October 16, 2018 at Heritage Pointe in Huntington, Indiana. Tom was born April 12, 1950 in Detroit, Michigan to Robert Richhart and Peggy (Head) Duvall. He graduated from Huntington High School in 1969. After serving in various capacities for companies in a long, successful career, Tom retired from working in 2010 with nearly thirty years at ITT. He will be lovingly missed by his daughter, Christina (Lynn Ramsay) of Sun Lakes, AZ; his partner, Sally Davis of Muncie, IN; Brother, Robert (Jeanne) Richhart of Severna Park, MD; Sisters, Peggy (Chuck) Schieferstien of Fort Wayne, IN, Cynthia Richhart of Lancaster, CA; half-sister, Gloria (George) Lee of Le Crescenta, CA; adopted brother, James Richhart; adopted sister, Sherryann Kinkaid as well as his partner’s family, his late wife’s family, his relatives in Michigan, and numerous friends. He was preceded in death by his parents and his wife of thirty-nine years, Janet Richhart. Tom enjoyed taking cruises and other trips with Sally, and especially enjoyed visiting his daughter in Arizona. He also loved fall and going to various fall festivals around the Mid-west. In recent years, he began to enjoy cooking but continued to love eating even more! Tom’s other passions included a love for animals, spending time with family and friends and also staying involved with social groups from previous employers, Memcor and ITT. Tom has been described by many as the life of the party and rarely met a stranger. He will be greatly missed by the many lives he has touched. Visitation will be held Wednesday, October 24th, 2018 from 12-3 p.m. followed by funeral services at 3 p.m. both at Bailey-Love Mortuary, 35 West Park Drive Huntington, IN, Rev. Gus Hacker officiating. Memorial contributions may be made to Helping Paws Pet Haven or Huntington County Humane Shelter in care of Bailey-Love Mortuary, 35 West Park Drive Huntington, IN 46750.

The family of Thomas W. Richhart created this Life Tributes page to make it easy to share your memories.

Send flowers to the Richhart family.