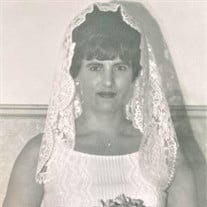 Thelma Wiegmann, 83, of Roanoke, passed away at 10:11 am Friday, June 11, 2021 at Miller's at Oak Pointe, Columbia City, IN. Thelma was born on March 17, 1938 in Hazard, KY, the daughter of Carl Spencer and Pearl (Smith) Spencer. She married Erwin C. Wiegmann in Huntington, IN; He preceded her in death in 1999. Thelma was a Homemaker and she loved spending time with her family. Survivors include her Son, Bob Miller of Henryville, IN; Daughter, Lois Pelz of Columbia City, IN; Two Brothers, Odell (Rose) Spencer of Ft. Wayne, IN, Gene (Debbie) Spencer of Huntington, IN; One Sister, Tish Storms of MN; several Grandchildren; and several Great Grandchildren. She is preceded in death by her Spouse, Erwin C. Wiegmann; Son, Donnie R. Smith; Mother, Pearl Spencer; Father, Carl Spencer; Sister, Effie Richey; Brother, Ralph Spencer; Brother, Hershel Spencer; and Brother, Ray Spencer. No services will be held at this time. Preferred memorials may be made in memory of Thelma to the American Legion, in care of Bailey-Love Mortuary, 35 West Park Drive, Huntington, IN, 46750. Please sign the online guest book at www.baileylove.com. Bailey-Love Mortuary is honored to serve the family of Thelma Wiegmann.

The family of Thelma Wiegmann created this Life Tributes page to make it easy to share your memories.

Send flowers to the Wiegmann family.