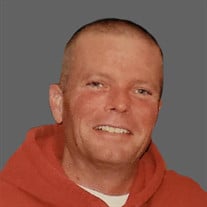 Terry Lynn Hargrove, Jr. 56, of Huntington, passed away at 8:17 pm Wednesday, September 15, 2021 at his residence. Terry was born on February 7, 1965 in La Porte, IN, the son of Terry and Nancy (McCormick) Hargrove. He was a 1983 Graduate of Durand High School in Durand, MI. Terry served in the United States Navy as a Boiler Tech on the USS Austin from 1983-1987. He worked as a Quality Control Manager at Gerdau (formerly Quanex/MacSteel) from 1988-2021. His interests included fast cars and motorcycles, and an endless cup of coffee. Terry had a big heart for rescued and lost dogs. His daughters were his pride and joy and being Papaw T to Grayson was the highlight of his life. Survivors include his Two Daughters, Chelsea (Ethan) Bartrom of Huntington, IN, and Madison Hargrove of Indianapolis, IN; Mother, Nancy McCormick of La Porte, IN; Father, Terry Hargrove, Sr. of Durand, MI; Two Sisters, Tracy Hargrove, and Alon Sahlke; Three Brothers, Tom VanHolten, Jeff VanHolten, and Daniel Hargrove; and his Grandson, Grayson Bartrom. He is preceded in death by his Infant Son, Coleman Scott Hargrove, and his Step-Mother, Sandra Hargrove. Visitation will be from 3:00 pm - 6:00 pm Tuesday, September 21, 2021 at Bailey-Love Mortuary, 35 West Park Drive, Huntington, IN. Funeral services will be held at 6:00 pm Tuesday, September 21, 2021 at Bailey-Love Mortuary with Pastor Shayne Jonker officiating. Preferred memorials may be made in memory of Terry to the Huntington County Humane Shelter, or the Ft. Wayne Pit Bull Coalition, or the American Cancer Society, in care of Bailey-Love Mortuary, 35 West Park Drive, Huntington, IN, 46750. Please sign the online guest book at www.baileylove.com. Bailey-Love Mortuary is honored to serve the family of Terry Lynn Hargrove, Jr.

The family of Terry Lynn Hargrove Jr. created this Life Tributes page to make it easy to share your memories.

Send flowers to the Hargrove family.