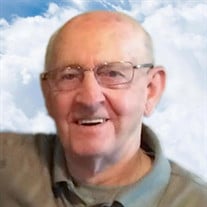 Russell (Babe) Newell, Jr., age 85, of Huntington, Indiana passed peacefully from this life to the next at 1:15 a.m. on Friday, June 19, 2020, at Community North Hospital in Indianapolis, Indiana, from complications due to COVID-19. Burial... View Obituary & Service Information

The family of Russell (Babe) Newell Jr. created this Life Tributes page to make it easy to share your memories.

Send flowers to the Newell family.