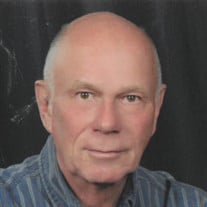 Ronald W. Buesking, 77, of Huntington, passed away at 3:20 am Wednesday, October 14, 2020 at Tipton Place in Huntington, IN where he had been a resident for the last 2 years. Ronald was born on June 29, 1943 in Ft. Wayne, IN, the son of Walter Buesking and Dorothea (Kopp) Buesking. He graduated from South Side High School 1961, and earned his Masters Degree from University of Saint Francis of Ft. Wayne, IN. He retired from Crestview Middle School, Huntington County Community School Corporation after 38 years of service. in 2006. Ronald was a member of Trinity English Lutheran Church of Ft. Wayne, and he was an avid sports fan of IU Basketball, the Chicago White Sox and the Indianapolis Colts. Over the years, Ron was an alter boy and also taught Catechism. Ron was involved in Huntington Alert, Forks of the Wabash, Friends of the Library, a Tudor for Huntington Literacy Coalition, and on the Board of Directors for the Lafontaine Center. Ron was a beloved brother, uncle, friend and mentor to many of his students throughout his teaching career. His passion and gift was teaching. He had the unique ability, to challenge, motivate, inspire and connect with his students over the entire 38 years he taught. In his free time he enjoyed long walks, fishing, spending time at the lake, reading (mainly British Mysteries) and spending time with family and friends. Survivors include his Brother, Thomas (Nancy) Buesking of Arlington, TX; Sister, Judith "Judy" Mitten of Huntington, IN; nephew, Michael (Ashley) Mitten of Huntington, IN; and two nieces, Christie Nichols (Kelcey) of Arlington, TX, and Amanda (Ray) Welky of Euless, TX. He is preceded in death by his Father, Walter Buesking, Mother, Dorothea Buesking, Brother, Edwin Buesking, and Sister, Lois Buesking. Private Burial will be held at Lindenwood Cemetery, Ft. Wayne, IN. Preferred memorials may be made in memory of Ronald to the Parkinson's Foundation and Huntington County Literacy Coalition in care of Bailey-Love Mortuary, 35 West Park Drive, Huntington, IN, 46750.

The family of Ronald W. Buesking created this Life Tributes page to make it easy to share your memories.

Send flowers to the Buesking family.