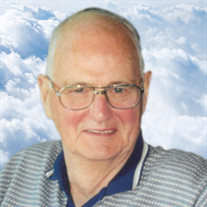 Robert M. “Bob” Straight, age 92, of Huntington, died at 10:00 p.m. Saturday, November 10, 2018 at Heritage Pointe of Huntington. Visitation will be from 1 - 8 p.m. Friday, November 16, 2018 at Bailey-Love Mortuary, 35 West Park Drive, Huntington, Indiana. Funeral services will be held at 11 a.m. Saturday, November 17, 2018 at Huntington First Church of the Nazarene, 1555 Flaxmill Road, Huntington, Indiana with Rev. Dr. Marti Lundy officiating. Burial will be in Mt. Hope Cemetery in Huntington with military graveside rites performed by VFW Post #2689 of Huntington. Preferred memorials are to Evangelical United Methodist Church or Indiana Basketball Hall of Fame, in care of Bailey-Love Mortuary, 35 West Park Drive, Huntington, Indiana, 46750. Bob was born on January 8, 1926 in Hammond, Indiana, the son of Matthew and Stella (Blackburn) Straight. He began what would become his legacy as an icon in basketball as a talented player at Hammond High School, graduating in 1944. He served in the United States Navy on an LST in the Pacific Theatre during World War II. He studied Education at Ball State University, where he met his wife, Jean M. McCracken. They were married on September 1, 1949. In 1950, he began coaching high school basketball at Earl Park, then Hammond and Highland, landing in Huntington in 1959. With Bob at the helm over the following eight seasons, the Huntington High School boys’ basketball team won eight sectionals, four regionals, and a semi-state title. A highlight of his coaching career was leading the 1963-64 team to the state finals game, finishing runner-up. While head coach, he held positions of athletic director and assistant principal. He traded his title as “coach” for “principal” in 1967 upon the opening of the new Huntington North High School, retiring in 1986 after 20 years. While serving as principal, he continued to contribute to the sport becoming a five-term member, and eventually the organization’s only three-term president, of the Indiana High School Athletic Association’s Board of Control. A 1979 inductee himself, he went on to become President of the Indiana Basketball Hall of Fame and was instrumental during the time the building was moved from Indianapolis to New Castle. The opening ceremony featured then-sitting Vice President Dan Quayle, whom Bob had cut from Huntington basketball during his school years. He also enjoyed his work as chairman of the banquet committee for the HOF for 25 years and served many terms on the HOF Board of Directors. He was president of the Indiana Coaches Association and organized clinics for basketball coaches throughout the country; one of these clinics brought him to meet Bob Knight, who became a close friend. The HOF honored him at a ceremony in 2014 for the many contributions he made to high school basketball throughout his life. In 2015, the Huntington North High School basketball court was named “Bob Straight” court, bearing graphics of his own signature. Bob also enjoyed watching sports, especially basketball. He was a member of Evangelical United Methodist Church in Huntington. He loved spending time with his family and friends, and while winning was great, his favorite thing about coaching was the extended family it gave him. Survivors include his wife of 69 years, Jean M. Straight of Huntington, daughters Cheryl (Dan) Greene of Franklin, Indiana, Diane (Tim) Miller of Fort Wayne, Beth (Todd) Armstrong of Huntington, a son-in-law, Steve Hurrle of Franklin, 11 grandchildren, and 13 great grandchildren. He is preceded in death by his parents, a daughter, Barb Hurrle, a sister, Doris Couch, a brother, Dick Straight, and a nephew, Rick Straight.

The family of Robert M. "Bob" Straight created this Life Tributes page to make it easy to share your memories.

Send flowers to the Straight family.