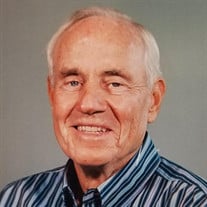 Robert A. Koehlinger, 87, of Warren, IN passed away at 8:00 pm Friday, February 26, 2021 at Heritage Pointe of Warren. Robert was born on October 19, 1933 in Ft. Wayne, IN the son of Christian Koehlinger and Mary Koehlinger. He graduated from Huntington High School in 1951 and Indiana Tech in 1961 and married Janet Riggs Andrew on December 30, 1961 in the Presbyterian Church, Huntington, IN. He proudly served in the United States Navy from 1952 to 1956. He was a current member of Trinity United Methodist Church Huntington, and was a former member of Presbyterian Church of Huntington and Venice, Florida. Robert was also a member of the Elks Lodge of Venice, American Legion and VFW Huntington, where he was a Lifetime member, and was a member of the South Venice Yacht Club in Venice FL. Robert worked as an Engineer at MagneTek in Huntington and Goodland, IN for 33 years. The Koehlinger's lived in Huntington until 1993 when they moved to Lafayette, IN until he retired in 1995. They then moved to Venice, FL where he and Janet worked for Nielsen Media Research for 10 years before returning to Huntington in 2006. Robert Loved to play tennis and did so two or three times a week. He also liked doing volunteer jobs at Parkview Hospital. He enjoyed working in the yard with flowers and vegetable gardens. He enjoyed chatting with people and loved talking about the good old days. He and Janet loved to listen to music and attending dances. His love for God, his family, his home, and his friends were always important. He will be greatly missed by all. Survivors include his loving wife, Janet Koehlinger of Warren, IN; Three Daughters, Pamela (Michael) Callahan of North Manchester, IN, Dawn Costin of Columbus, OH, Cathy (Gary) Bilsland of Carmel, IN; Son, Christopher (Melissa) Koehlinger of Sarasota, FL; Six Grandchildren; Three Step grandchildren; and Ten Great Grandchildren; Two Sister in laws, Barbara Souder, and Emmalou Dinken; Brother in law, Stuart Dinken; and several Nieces and Nephews. He is preceded in death by his Sister, Hilda Doerffler, Sister, Marieda Lepper, Sister Frieda Hobrock, Sister, Melinda McKeeman, Brother, Walter Koehlinger, Brother, Arthur Koehlinger, Brother, Martin Adam, Brother, Herman Adam, Father, Christian Koehlinger, Mother, Mary Koehlinger, and his Son in law, David Costin. Visitation will be from 1:00 pm - 2:00 pm Saturday, March 6, 2021, followed by Funeral Services at 2:00 pm at Bailey-Love Mortuary, 35 West Park Drive, Huntington, IN with Rev. Gerald Mooreland officiating. Due to the current Executive Order, masks and social distancing are required at all events. Preferred memorials may be made in memory of Robert to the YMCA, or the Boys & Girls Club, in care of Bailey-Love Mortuary, 35 West Park Drive, Huntington, IN, 46750. The family especially thanks the caregivers at the Heritage Pointe Hospice. Please sign the online guest book at www.baileylove.com. Bailey-Love Mortuary is honored to serve the family of Robert A. Koehlinger.

Robert A. Koehlinger, 87, of Warren, IN passed away at 8:00 pm Friday, February 26, 2021 at Heritage Pointe of Warren. Robert was born on October 19, 1933 in Ft. Wayne, IN the son of Christian Koehlinger and Mary Koehlinger. He graduated from... View Obituary & Service Information

The family of Robert A. Koehlinger created this Life Tributes page to make it easy to share your memories.

Send flowers to the Koehlinger family.