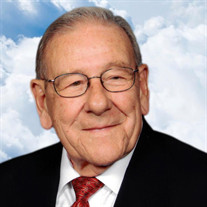 Robert L. Henn, age 90, of Huntington, died at 2:55 a.m. Thursday, October 17, 2019 at Heritage Pointe of Huntington. Visitation will be from 3 – 7 p.m. Wednesday, October 23, 2019 at Bailey-Love Mortuary, 35 West Park Drive, Huntington, Indiana. Funeral services will be held at 11 a.m. Thursday, October 24, 2019 at Bailey-Love Mortuary with Rev. Gerald Moreland officiating. There will be one hour of visitation prior to the service. Burial will be in Mt. Hope Cemetery in Huntington with military graveside rites performed by VFW Post #2689 of Huntington. Preferred memorials are to Huntington County Humane Society, Trinity United Methodist Church, or Cancer Services for Huntington County, in care of Bailey-Love Mortuary, 35 West Park Drive, Huntington, Indiana, 46750. Bob was born on April 29, 1929 in Ligonier, the son of Kenneth and Corrine (Hussey) Henn. He graduated from Ligonier High School in 1947 and earned a bachelor’s degree in Industrial Management from Purdue University. He was Past National President of Sigma Alpha Tau Air Transportation Fraternity at Purdue, as well as the Tau Kappa Epsilon Fraternity. He served in the United States Air Force as a First Lieutenant during the Korean War and was awarded two battle stars. Bob married Joanne S. Secrist on June 21, 1952 in Enid, Oklahoma; she preceded him in death on November 26, 2003. Bob retired in 1993 as a Regional Sales Manager from Farm Bureau Insurance after 33 years of service. He married Emmaline P. “Emmy” O’Harrow Purviance on December 27, 2004 in Huntington; she preceded him in death on February 13, 2014. Bob was a member of First Presbyterian Church in Huntington and later became a member of Trinity United Methodist Church. He was a lifetime member of American Legion Post #7 and VFW Post # 2689 in Huntington and Elk’s Lodge #796 in Bluffton. He was also a member of the Indiana Life Underwriter Association. Survivors include a son, David A. (Diane) Henn of Huntington, a stepson, Andy (Donna) Purviance of Carlsbad, California, and stepdaughters Mary P. (Mike Sepalak) York of Cary, North Carolina and Margie P. Hedrick of Huntington. Also surviving are 11 grandchildren and 16 great grandchildren. He is preceded in death by his parents, both wives, a son, Robert A. “Rob” Henn, a brother, Anthony R. Henn MD, and a stepgrandson, Aaron Freeman York.

The family of Robert L. Henn created this Life Tributes page to make it easy to share your memories.

Send flowers to the Henn family.