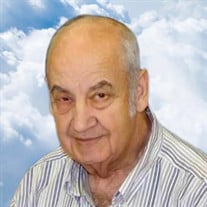 Raymond Leroy Quakenbush, age 78, of Andrews, died at 9:47 a.m. Tuesday, May 12, 2020 at Wellbrooke of Wabash. Graveside services will be held at 10 a.m. Friday, May 15, 2020 in Andrews Riverside Cemetery with Pastor Tim Webb officiating. Preferred memorials are to the donor’s choice, in care of Bailey-Love Mortuary, 35 West Park Drive, Huntington, Indiana, 46750. Ray was born on January 29, 1942 in Andrews, the son of Cevil L. and Rosemary (Miller) Quakenbush. He married Sharon R. Pearson on October 24, 1959 in Andrews; she preceded him in death on March 1, 2016. He retired from Sealtest in Huntington after 20 years of service. He was a member of Southside Freewill Baptist Church in Wabash and enjoyed solving word search puzzles and watching gameshows. Survivors include a daughter, Ronda S. (Jeff) Coldren of Huntington, sons Roger A. (Kim) Quakenbush of Wabash and Rick L. (Melissa Cundiff) Quakenbush of Huntington, brothers Kenny (Sue) Quakenbush of Sandborn, Indiana, David Quakenbush and Mark Quakenbush, both of Marion, and Danny (Brenda) Quakenbush of Fort Wayne, six grandchildren, and 12 great grandchildren. He is preceded in death by his parents, his wife, a grandson, Matthew Dunnagan, and a brother, Robert Quakenbush.

The family of Raymond Leroy Quakenbush created this Life Tributes page to make it easy to share your memories.

Send flowers to the Quakenbush family.