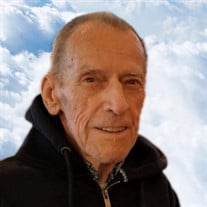 Raymond J. Budrow Sr., age 93, of Fort Wayne, formerly of Huntington, passed away peacefully in his sleep on Thursday, January 24, 2019 at Coventry Meadows in Fort Wayne. Visitation will be from 3 – 7 p.m. Monday, January 28, 2019 at Bailey-Love Mortuary, 35 West Park Drive, Huntington, Indiana. A Mass of Christian Burial will be held at 11 a.m. Tuesday, January 29, 2019 at St. Mary Catholic Church, 903 North Jefferson Street, Huntington, with Father Steve Colchin officiating. There will be one hour of visitation at the church prior to the service. Burial will be in Marion National Cemetery with military graveside rites provided by VFW Post #2689 of Huntington. Preferred memorials are masses to St. Mary Catholic Church, in care of Bailey-Love Mortuary, 35 West Park Drive, Huntington, Indiana, 46750. Ray was born on September 26, 1925 in Webster, Massachusetts, the son of Jesse and Hermine (Langlois) Budrow. Prior to his retirement, he had a lengthy career in the electronics industry, most notably at Magnavox, E Systems – Memcor, and Fisher Engineering. Ray was a proud World War II Navy Veteran, and one of his most cherished memories was participating in an Honor Flight to Washington D.C., escorted by two of his sons, Raymond Jr. and William. Ray had a great passion for nature and his hobbies were nature photography, hiking on a regular basis in State Parks throughout Northern Indiana, and traveling every highway and byway of the region on weekly Sunday drives. Survivors include his wife of nearly 73 years, Ola Catherine “Kitty” Budrow (nee. Pitts) and their eight children, Mary Ann (Dick) Schulte of Port Townsend, Washington, Raymond J. (Connie) Budrow Jr. of Huntington, Joseph (Colleen) Budrow of Anchorage, Alaska, Robert (Kim) Budrow of Sequim, Washington, and William (Jacki) Budrow, Cathy (Stan) Hammond, and Karl (Tammy) Budrow, all of Fort Wayne, as well as Jeannine (Randy) Allen of West Chester, Ohio. Ray is also survived by 19 grandchildren, 16 great grandchildren, a brother John “Don” Budrow of Ocala, Florida, and a sister, Norma Baker of Nevada. His parents and a brother, Jesse “Jim” Budrow, precede him in death.

The family of Raymond J. Budrow Sr. created this Life Tributes page to make it easy to share your memories.

Send flowers to the Budrow family.