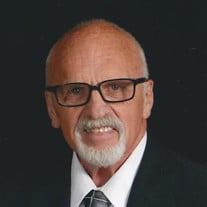 Ralph Keith Smith, 81, of Huntington, passed away at 8:30 am Saturday, March 13, 2021, at his residence surrounded by his loving family. Keith was born on July 17, 1939, in Clarion, PA, the son of Albert Smith and Alice (Traister) Smith. He graduated from Knox PA High School with the class of 1957, earned a Bachelor’s Degree from Anderson College, and a Masters Degree in Education from University of Pittsburgh. He married the love of his life Janet E. Howard on June 20, 1964, in Sturgis, MI. He retired from Ohio State Neuro Psych Hospital in 2005. Keith had a strong faith and was a member of the Faith Community Church of God in Huntington, IN. He spent many years as a teacher, coach, athletic director, church camp director, and recreational therapist. In 2013, he was inducted into the University of Pittsburgh at Bradford Athletic Hall of Fame on the university’s 50th anniversary, in recognition of his significant role establishing the athletics department during the university’s infant years. He was an avid sportsman, but his passions were fishing and Ohio State University football. Keith was devoted to his family and friends. Survivors include his wife of 56 years, Janet, of Huntington, IN; Two Daughters, Joell M. (Holling) Smith-Borne of Nashville, TN, and Janell J. (William J.) Webb of Moorpark, CA; Son, Jeffrey K. (Judy) Smith of Columbus, OH; 6 Grandchildren; and 5 Great Grandchildren. He is preceded in death by his Father, Albert L. Smith, and Mother, Alice M. Smith. A Memorial Celebration of Life will be held at a later date. Preferred memorials to Parkview Hospice or American Alzheimer's Association, in care of Bailey-Love Mortuary, 35 West Park Drive, Huntington, IN, 46750. Please sign the online guest book at www.baileylove.com. Bailey-Love Mortuary is honored to serve the family of Ralph Keith Smith.

Ralph Keith Smith, 81, of Huntington, passed away at 8:30 am Saturday, March 13, 2021, at his residence surrounded by his loving family. Keith was born on July 17, 1939, in Clarion, PA, the son of Albert Smith and Alice (Traister) Smith. He... View Obituary & Service Information

The family of Ralph Keith Smith created this Life Tributes page to make it easy to share your memories.

Send flowers to the Smith family.