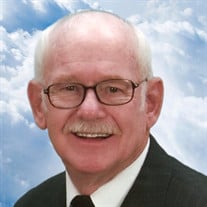 Ralph Edward Banter, age 78, of LaFontaine, passed away on Saturday, February 15, 2020 at Visiting Nurse and Hospice Home in Fort Wayne. Visitation will be from 2 – 8 p.m. Wednesday, February 19, 2020 at Bailey-Love Mortuary, 35 West Park Drive, Huntington, Indiana. Funeral services will be held at 11 a.m. Thursday, February 20, 2020 at Bailey-Love Mortuary with Pastor Harold Smith officiating. There will be one hour of visitation prior to the service. Burial will be in Gardens of Memory in Huntington County. Preferred memorials are to Banquo Christian Church or Cancer Services for Huntington County, in care of Bailey-Love Mortuary, 35 West Park Drive, Huntington, Indiana, 46750. Ralph was born on March 29, 1941 in Milo, Huntington County, Indiana, the son of Ora and Hilda (Chenoweth) Banter. He graduated from Jefferson Township High School in Huntington County in 1961 and then continued his studies as a machinist under the direction of Walter Elliott in Ossian. He married Margaret Moorman on September 10, 1961 in Banquo. Ralph was employed at Ossian Paper Co., Byrd Lumber, and Eagle Lumber in Marion before owning his own businesses Banter Machine and Banter Bros. Tractor Pulling. He was a member of NTPA WPI, having served as Vice President for many years and having won many titles and championships. He also served as Director and Treasurer of Indiana Pullers Inc. After retirement he rebuilt antique vehicles and was a member of the Differentials Car Club. His most important membership was with Banquo Christian Church, where he served as a deacon and trustee. Survivors include his wife of 58 years, Margaret Banter of LaFontaine, a daughter, Sherry (Terry) Knight of Van Buren, and brothers Ira Banter of Van Buren, David (Jorita) Banter of Huntington, and Michael (Judy) Banter of Marion. Also surviving are grandchildren Kristen (Brent) Freiburger of Fairbanks, Alaska, Shannon (Brian) Eddie of Montclair, Virginia, Megan (Ben) Whitaker of Wabash, Erin (Arjun) Bhalla of Fishers, and Matthew Knight of Van Buren, great grandchildren Aydan LaFond, Kyen Freiburger, Theodore Eddie, Elijah Eddie, Thomas Eddie, Lela Eddie, Maci Whitaker, Natalie Whitaker, and Benjamin Whitaker, and nieces Kim Banter of Huntington, Heather (Rich) Holmes of Indianapolis, and Heidi (Aaron) Bleich of Carmel. He is preceded in death by his parents, a nephew, Steve Banter, and a sister-in-law, Martha Banter.

The family of Ralph Edward Banter created this Life Tributes page to make it easy to share your memories.

Ralph Edward Banter, age 78, of LaFontaine, passed away on Saturday,...

Send flowers to the Banter family.