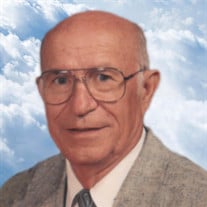 Paul A. Okuly, age 95, of Huntington, died at 2:46 a.m. on Saturday, August 10, 2019 at Visiting Nurse and Hospice Home in Fort Wayne. Visitation will be from 3 – 7 p.m. Thursday, August 15, 2019 at Bailey-Love Mortuary, 35 West Park Drive, Huntington, Indiana, with rosary services will immediately following at 7 p.m. A Mass of Christian Burial will be held at 11 a.m. Friday, August 16, 2019 at SS Peter and Paul Catholic Church, Huntington, Indiana with Father Tony Steinacker officiating. There will be one hour of visitation at the church prior to the service. Burial will be in Mt. Calvary Cemetery in Huntington. Preferred memorials are to Love Inc. Food Pantry or SS Peter and Paul Catholic Church, in care of Bailey-Love Mortuary, 35 West Park Drive, Huntington, Indiana, 46750. Paul was born on July 3, 1924 in Huntington, the son of William J. and Mary F. (Karst) Okuly. He graduated from Huntington Catholic High School in 1942 and served four years as a radioman in the Acorn Unit in the United States Navy in the South Pacific with the Marines during World War II. When he returned to Huntington, he worked in the office of Harry’s Tire Shop. He was married to Patricia A. Hirneise on October 15, 1949 at SS Peter and Paul Catholic Church, where he was very active in the school and ministry – he helped with youth basketball and was a leader for Boy Scouts. In 1950 he began his work for Kraft Foods. He then worked at Nappanee Milling Company where he won a Ford Mustang for achieving Salesman of the Year. In 1963, he started his work in post building and design and sales at Borkholder Buildings in Huntington for ten years, becoming the Huntington Branch Manager. In 1978, he and his wife launched the Huntington High School youth group for the church. Paul also served on the church finance and maintenance board and for many years, he served during the funeral masses. He was an eucharist minister and visited both Heritage Pointe of Warren and Huntington. He and his wife were leaders in the Christian Family Group, then Father Roseler appointed him leader of the Conference of Christian Doctrine. He was fourth degree in the Knights of Columbus. He retired from Farm Bureau Lumber Company in 1988 after 17 years of service there. Paul and his wife loved to travel, having covered the United States and most of Canada from Nova Scotia west to Vancouver. He served on the Huntington County Planning Commission for 20 years and also the Huntington City Plan Board. From 1993-1995 he was president of the Huntington County Council on Aging. He was a sponsor for a home with Habitat for Humanity and he volunteered at Love Inc., where he was awarded the Dorothy Scheiber award in 2008. Paul volunteered at the local hospital delivering meals and spent many hours visiting the sick and those shut-in. He was known for growing beautiful flowers. He enjoyed fishing, especially ice fishing; he also liked playing golf. When he retired those hobbies, he took up jigsaw puzzles, becoming a master at them and sharing them with any others. He loved spending time with his family. Survivors include his wife of almost 70 years, Patricia A. Okuly of Huntington, sons William J. Okuly of Woodbridge, Virginia, Michael E. (Cheryl Schoeff) Okuly of Andrews, and Daniel K. (Jody Taylor) Okuly of Allen County, a daughter, Mary Kay (Michael) Holt of Lynchburg, Tennessee, a brother, James E. Okuly of Saginaw, Michigan, a sister, Arnetta Hunnicutt of Huntington, eight grandchildren, 12 great grandchildren, two great-great grandchildren, and many loved nieces and nephews. He is preceded in death by his parents, brothers Joseph Okuly, Bernard Okuly, Gene Okuly, Harold Okuly, and Francis Okuly, and a sister, Mary Ruth Okuly.

The family of Paul A. Okuly created this Life Tributes page to make it easy to share your memories.

Send flowers to the Okuly family.