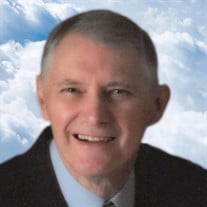 Paul F. Kloer, age 83, of Huntington, died at 3:01 a.m. Wednesday, March 11, 2020 at Lutheran Hospital in Fort Wayne. Visitation will be from 3 – 7 p.m. Tuesday, March 17, 2020 at Bailey-Love Mortuary, 35 West Park Drive, Huntington, Indiana. Funeral services will be held at 10 a.m. Wednesday, March 18, 2020 at Bailey-Love Mortuary with Pastor Steve Eckert and Rev. Bill Rapp officiating. There will be one hour of visitation prior to the service. Burial will be in Pilgrims Rest Cemetery in Huntington with military graveside rites performed by VFW Post #2689 of Huntington. Preferred memorials are to Heritage Pointe of Huntington or Huntington County 4-H, in care of Bailey-Love Mortuary, 35 West Park Drive, Huntington, Indiana, 46750. Paul was born on September 26, 1936 in Fort Wayne, the son of Albert & Mildred (Stalf) Kloer. He graduated from Elmhurst High School in 1955 and married Joan Ruth Altman on April 21, 1956 in Fort Wayne; she preceded him in death on August 21, 2010. Paul served honorably in the Fort Wayne Air National Guard and then in the Air Force during the Cuban Missile Crisis. He retired in 2001 from Bendix division of Allied Signal, where he worked for over six years. Prior he was the service manager and former Vice President of Altman Kramer Motors in Huntington. Paul was a Mizpah Shriner with the Fort Wayne chapter and was a resident of Heritage Pointe of Huntington since 2009. He loved fishing and camping and was an avid outdoorsman. Survivors include his sons Michael (Lanna) Kloer and Jeffrey Kloer, both of Huntington, a daughter, Michele (David) Glenn of Baltimore, Maryland, a grandson, Eric (Andrea) Kloer of Huntington, and a great grandson, Lawson Kloer of Huntington. He is preceded in death by his parents, wife, a son, Matthew Kloer, a brother, Rolland Kloer, and grandsons Andrew and John Kloer.

The family of Paul F. Kloer created this Life Tributes page to make it easy to share your memories.

Send flowers to the Kloer family.