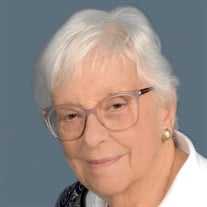 Patricia Ann Hirneise Okuly, age 92, was born on October 29th, 1928 in Carrolton, New York to Herman and Lucinda Goodmiller Hirneise. Her family moved back to Huntington, Ind. In 1929 where she graduated from Huntington High School in 1946. Patricia worked at Southside Drug Store while attending high school. After graduation she was employed in the office of Farnsworth, later in the office of Carroll house. Patricia married Paul A Okuly on October 15th. 1949 at St. Peter and Paul’s Catholic Church in Huntington, Indiana. Patricia taught religion classes there for twenty years. She was a member of the Rosary Society. Patricia and her husband (Paul) started the youth group in 1976 before retiring in 1987. She was a tutor for many years at Lancaster and Northwest Elementary. Patricia and her husband were volunteers at the Huntington Parkview Hospital delivering meals and later in the medical records department. They did extensive traveling throughout the United States and across Canada from Nova Scotia west to Vancouver. Patricia loved to read, play cards and was known for her many gifts of knitting afghans. Patricia is survived by her three sons; William Okuly of Woodbridge, Virginia, Michael (Cheryl) Okuly of Andrews, Indiana, Daniel (Jody) Okuly of Fort Wayne, Indiana and one daughter; Mary Kay (Mike) Holt of Lynchburg, Tennessee. Patricia loved all her children especially her eight grandchildren; Nichole McIntyre, Ryan Okuly, Kory Okuly, Josh Holt, Matt Okuly, Zach Holt, Shawn Okuly and Deserae Okuly; 12 great grandchildren, two step great grandchildren, three great great grandchildren and many nieces and nephews. She is preceded in death by her beloved husband Paul (8/10/2019,) her parents, sister Betty Swander and daughter-in- laws Sally Okuly, Kristy Okuly and Mary Lyn Okuly Visitation will be from 3:00 pm - 7:00 pm Tuesday, February 23, 2021 at Bailey-Love Mortuary, 35 West Park Drive, Huntington, IN. followed by the Rosary at 7 pm. Funeral Mass will be held at 10:00 am Wednesday, February 24, 2021 at SS. Peter & Paul Catholic Church, 860 Cherry St. Huntington, IN, with FR. Tony Steinacker officiating. There will be one hour of visitation prior to the service. Burial will be in Mt. Calvary Cemetery, Huntington, IN. Due to the current Executive Order, masks and social distancing are required at all events. In lieu of flowers please send in kind gifts to St. Peter and Paul’s Church Youth Group, Boys and Girls Club of Huntington, Andrews Lions Club and St. Jude.

Patricia Ann Hirneise Okuly, age 92, was born on October 29th, 1928 in Carrolton, New York to Herman and Lucinda Goodmiller Hirneise. Her family moved back to Huntington, Ind. In 1929 where she graduated from Huntington High School in 1946.... View Obituary & Service Information

The family of Patricia Ann Okuly created this Life Tributes page to make it easy to share your memories.

Send flowers to the Okuly family.