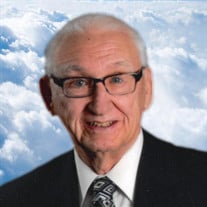 Norman D. Cozad, age 88, of Huntington, died at 5:21 a.m. on Saturday, June 29, 2019, at Visiting Nurse and Hospice Home in Fort Wayne. Visitation will be from 3-7 p.m. Tuesday, July 2, 2019, at Bailey-Love Mortuary, 35 West Park Drive, Huntington, Indiana. Funeral services will be at 11 a.m. Wednesday, July 3, 2019, at Bailey-Love Mortuary, with Rev. Dale Linhart officiating. There will be one hour of visitation prior to the service. Burial will be in Gardens of Memory in Huntington County. Preferred memorials are to an organization for autism, Mapleseed Farms, in care of Bailey-Love Mortuary, 35 West Park Drive, Huntington, Indiana 46750. Mr. Cozad was born November 8, 1930, in Huntington, the son of Elmer and Mary Ellen (Dumbauld) Cozad. He graduated from Huntington High School in 1948 and from Huntington College in 1952. He served in the United States Army during the Korean War. He married M. Jean Altman on August 17, 1952; she preceded him in death in 1972. His second marriage was to Sharon J. Biehl on March 22, 1974 in Huntington. Mr. Cozad earned a Master’s Degree in School Administration and Guidance and a Specialist in Education degree from Indiana University. In 1991 he retired from the Huntington County Community School Corporation after 37 years in education, during which he served as a math teacher, administrator and coach. In addition, he worked as a life insurance underwriter for 18 years before retiring in 1996, and was a site coordinator providing tax assistance for the elderly at the Senior Center. Mr. Cozad was a lifetime member of the United Methodist Church in Huntington, where among his roles he served as a Lay Speaker. Among his many other activities and affiliations in life, Mr. Cozad spent 30 years officiating football, basketball, baseball and track; was a member of the Huntington Exchange Club, the Northeast Indiana Secondary Principals’ Association, the Huntington County Principals’ Association, the Huntington County Retired Teachers’ Association, the Huntington University Alumni Board, and the Huntington County Churches Bowling League. In 1952 Mr. Cozad was listed in the “Who’s Who Among Students in American Colleges and Universities” and in the 1952 American College Student Leaders. Survivors include his wife of 45 years, Sharon Cozad of Huntington; sons Troy (Ann) Cozad of Fort Wayne and Brad (Patty)Biehl of Bloomington, Indiana; daughters Tricia (Dave) Newman and Dianne (Steve) Gaughan, both of Indianapolis; a daughter-in-law, Kay Cozad, of Fort Wayne; a brother, John (Margaret) Cozad of Atlanta, Georgia, seven grandchildren and four great grandchildren. Along with his parents, he is preceded in death by a son, Trent Cozad, and a brother, Wayne Cozad.

The family of Norman D. Cozad created this Life Tributes page to make it easy to share your memories.

Send flowers to the Cozad family.