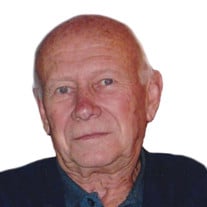 Nelson L. Yentes, 94, of Huntington, IN passed away at 12:15 pm Sunday, April 4, 2021 at his residence. Nelson was born on June 21, 1926 in Andrews, IN the son of Henry Yentes and Mada (Schenkel) Yentes. He was a 1944 graduate of Andrews High School and married Rose Elizabeth Bomersback on August 25, 1948 in Huntington, IN; she preceded him in death on March 28, 2007. He was a proud Veteran of the US Navy, serving during WWII. Nelson retired as a Letter Carrier from the United States Postal Service, and was also the Owner of the B-K Root Beer Drive In in Huntington. He was a member of SS Peter & Paul Catholic Church, the Knights of Columbus, American Legion Post #7 and VFW Post 2689 all of Huntington, IN. He enjoyed boating, fishing and spending time with his grandchildren and great grandchildren Survivors include his three daughters, Connie Abbett of Saint Augustine, FL, Peg (Gary McCorkle) Yentes of Buchanan, TN, Nancy (Rick) Winter of Huntington, IN. Also survived by his brother, Gerald Yentes of Shelbyville, IN; seven grandchildren; twelve great grandchildren; and many nieces and nephews. He is preceded in death by his father, Henry V. Yentes, mother, Mada E. Yentes, wife, Rose Elizabeth Yentes, brother, Herbert Yentes, brother, Gilbert Yentes, brother, Wallace Yentes, sister, Mary Holmes, and one great grandchild. Private visitation and services will be held and private burial will be in Mt. Calvary Cemetery in Huntington. Preferred memorials may be made in memory of Nelson to Love Inc. or Parkview Hospice, in care of Bailey-Love Mortuary, 35 West Park Drive, Huntington, IN, 46750. Please sign the online guest book at www.baileylove.com. Bailey-Love Mortuary is honored to serve the family of Nelson L. Yentes.

The family of Nelson L. Yentes created this Life Tributes page to make it easy to share your memories.

Send flowers to the Yentes family.