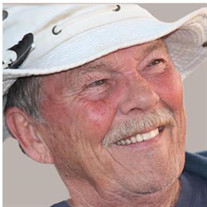 Mike’s life, 79 years from 05/05/41 – 02/13/2021, was lived on his own terms. He was born in Wilmot, SD, but spent the majority of the first half of his life living in Sheldon, IA where his love for the railroad and travel began. At 14 years old, he and a buddy decided to go on an adventure and jumped a ride on a rail car. After traveling several miles, they left the train, and to their chagrin, where shortly after picked up by the police. After spending a night in jail, they were picked up by a family member and unceremoniously returned home. Mike had quite a few careers, but the two most outstanding where owning his own trucking company for a few years, and the job that fulfilled his restless need to travel and his love of the railroad, L.B. Foster. He traveled throughout the country inspecting and grading defunct rail lines Foster had purchased. Mid life, one such job brought him to Huntington, IN, where he quickly made many great friends, decided to move to, and where he spent the remainder of his life. Another location Foster sent him to work was Brent, Ontario, Canada, a tiny rail yard/town, in the middle of Algonquin National Park. During the four summers he worked that job, he fell in love with the people and place, and buying a cottage there. Every summer he waited with ill concealed anticipation for his time spent there, his “little piece of heaven”. Mike was a proud Navy veteran, serving on the USS Saint Paul from 1959 – 1962. He was a member in good standing of the American Legion Post #85 and a long time member of the Moose Lodge #837, both of Huntington. Mike enjoyed sitting by a campfire with friends, of course with a Budweiser in hand, time on the lake in his pontoon, fishing, mowing the 2 ½ acres of lawn at his Huntington home, and riding around in his golf cart “surveying his kingdom”. Mike was extremely kind, honest, a good friend, funny and generous. He was a classic country music encyclopedia, and a crossword champion, tackling them in record time. He loved, and was so proud of his daughters, Michelle Simmons (Roland) and Shana Johnson (Kirk), both of Des Moines, IA, as well as his son, Scott of Eugene, OR. Mike’s grandchildren, Jessica Cezar, Kassidy Simmons, and Ashton, Pryce and Sage Johnson will always carry fond memories of him. He also leaves his brother, Dave Harn of Sheldon, and two great-grandchildren, Ava and Eli Cezar. Mike will be remembered by many nieces, nephews and friends. He was predeceased by 3 sisters and a brother. Mike passed at home with his hand in that of his best friend, and wife, Joan. Cremation has taken place. A celebration of Mike’s life will take place in the spring. Memorial donations can be made to Jamie’s Legacy, Inc., a non-profit stray/feral cat rescue, that he and Joan founded, in care of Bailey-Love Mortuary, 35 West Park Drive, Huntington, IN 46750. Please sign the online guest book at www.baileylove.com. Bailey-Love Mortuary is honored to serve the family of Michael J. Warner.

The family of Michael J. Warner created this Life Tributes page to make it easy to share your memories.

Send flowers to the Warner family.