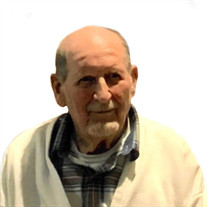 John Thompson, 94, of Huntington, IN, passed away peacefully at Parkview Huntington Hospital May 16, 2022, while receiving the excellent care of Parkview Hospice. During the last 24 hours of his life, he was blessed to talk with his family: daughter, sons, grandchildren, and great-grandchildren in person or on video phone calling; saying goodbyes, poking a little fun as needed, while sharing talk about experiences that brought meaning to life. John was a Christian, trusting in Jesus as his Savior and Lord and believing that his new life is in Heaven as his life on earth faded. He was a lifelong member of the United Brethren Church, attending in Blissfield, MI, Lake Havasu AZ, and most recently in Huntington IN. John was born on July 18, 1927, to Norman Nicholas and Genevieve ”Jennie” Thompson at their home in Riga Township, MI. John graduated from Blissfield High School in the class of 1945. John was an Army Veteran, serving from 1946 to 1949 in the WWII occupation, reconstruction, and training force in Italy. Returning stateside, John courted and married Mary Jane Miller, daughter of James Elmer and Venna Miller on November 4, 1950. While living in rural Palmyra, MI and raising a family of five children alongside Mary Jane, John built and sold 57 houses in the Blissfield-Adrian area, and later built and sold 1 house in Sydney Australia, 30 houses in Lake Havasu, Arizona and 2 houses in Huntington, IN. And he played tennis. He learned something of the sport at Virginia Beach in 1974, and persisted to swat balls with many including his grandchildren, playing past the age of 90. John is survived by five children, Janet (Jay) Ballard, James (Margaret) Thompson, David (Rosi) Thompson, Richard (Elizabeth) Thompson, and Michael (Mary) Thompson, fourteen grandchildren and twenty-four great grandchildren with 4 more expected this year. John was preceded in death by his wife of 67 years, Mary Jane and grandson Jake Thompson. Visitation in Huntington, IN will take place on Tuesday, May 24 from 3:00-7:00 p.m. at Bailey-Love Mortuary, 35 West Park Drive, Huntington, IN. A graveside service for the burial of the remains of both John and Mary Jane Thompson at the Riga, MI cemetery is planned for Saturday, May 28, 2022 Preferred memorials to the Parkview Hospice or By the Book/Weekday Religious Education, in care of Bailey-Love Mortuary, 35 West Park Drive, Huntington, IN 46750. Please sign the online guest book at www.baileylove.com. Bailey-Love Mortuary is honored to serve the family of John Thompson.

John Thompson, 94, of Huntington, IN, passed away peacefully at Parkview Huntington Hospital May 16, 2022, while receiving the excellent care of Parkview Hospice. During the last 24 hours of his life, he was blessed to talk with his family:... View Obituary & Service Information

The family of John Thompson created this Life Tributes page to make it easy to share your memories.

John Thompson, 94, of Huntington, IN, passed away peacefully...

Send flowers to the Thompson family.