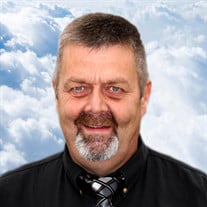 Johannes de Groot, of Andrews, passed away on Thursday, June 13, 2019 at Parkview Regional Medical Center in Fort Wayne after a blessed life of 66 years. Visitation will be from 4 – 7 p.m. Monday, June 17, 2019 at Bailey-Love Mortuary, 35 West Park Drive, Huntington, Indiana. Funeral services will immediately follow at 7 p.m. Monday at Bailey-Love Mortuary with Pastor Mike Hill officiating. In lieu of flowers, preferred memorials are to Life Church, in care of Bailey-Love Mortuary, 35 West Park Drive, Huntington, Indiana, 46750. Johan was born on July 6, 1952 in Utrecht, The Netherlands, the son of Egbert and Engelina de Groot. He grew up in a family of five brothers and five sisters. Later on the family moved to Loosdrecht, The Netherlands to start a dairy farm. In 1970 Johan started dating Wilhelmina van der Panne. After four years of dating they got married and were blessed with four daughters and a son, Marjolein, Patricia, Annemarie, Egberdien, and Johan. His passion was the cattle business which was to supply cattle for his packing house and for the local farmers in the area. He also enjoyed riding with his horse and buggy. In 1980 he bought a farm in Werkhoven, The Netherlands, and in 1982, he started milking cows on this farm. In 2002, Johan began his adventure in America together with his wife and two kids. He built a dairy farm that grew into a 2,000-cow dairy operation along with the youngstock and growing forages to feed the cows. Something he always said was, “You must go on.” He motivated and guided people with his wisdom. He attended Life Church in Huntington. The last few years his body started to fail him more and more. He had a hard time accepting that he had to slow down. His faith was big and he believed that God the Father gave him the strength to keep going. He was a loving husband, father, and grandfather. Surviving in Andrews are his wife of 45 years, Wilhelmina de Groot and son, Johan J. (Dejanne) de Groot. Surviving in The Netherlands are daughters Marjolein J.E. (Zach) Jansen of Nieuw Buinen, Patricia G. (Fred) Veldhuizen of Werkhoven, Annemarie M.C. (Patrick) Kuijer of Soest, and Egberdien (Elmar) Hogendoorn of Werkhoven. Johannes has 12 grandchildren. His parents precede him in death.

Johannes de Groot, of Andrews, passed away on Thursday, June 13, 2019 at Parkview Regional Medical Center in Fort Wayne after a blessed life of 66 years. Visitation will be from 4 &#8211; 7 p.m. Monday, June 17, 2019 at Bailey-Love Mortuary,... View Obituary & Service Information

The family of Johannes de Groot created this Life Tributes page to make it easy to share your memories.

Johannes de Groot, of Andrews, passed away on Thursday, June...