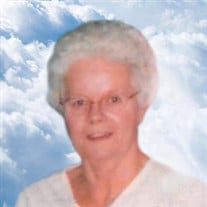 Janet S. Urschel Jenkins Sands, age 80, of Huntington, formerly of Bippus, passed away on Friday, July 10, 2020 at Kingston Care Center of Fort Wayne. Graveside services will be held at 11 a.m. Tuesday, July 14, 2020 in Fairview Cemetery in Servia with Rev. Raymond Scribner officiating. Janet was born on October 5, 1939 in Huntington County, the daughter of Howard and E. Lorene (Aldridge) Urschel. She graduated from Bippus High School in 1957 and was united in marriage to Jim Jenkins in December 1971. Jim preceded her in death in 1991. She later married Stanley Harrison Sands on October 11, 1996 in Pensacola, Florida; he preceded her in death on December 28, 2008. She retired from Saufley Field Naval Base in Pensacola after 15 years in civil service. She is survived by a sister, Charlene (Floyd) Hoch of Fort Wayne, nieces Barbara (Joe) Langel of Bluffton and Beth (Dan) Ackermann of Zanesville, nephews David (Deb) Hoch of Fort Wayne, Doug (Kellie) Hoch of Brooksville, Florida, and Donald (Kim) Hoch of Fort Wayne, 12 great nieces and great nephews, and 15 great-great nieces and great-great nephews, five stepchildren, and a brother-in-law, Ed (Susie) Sands of Huntington. She is preceded in death by her parents, husbands, and a nephew, Howard D. Hoch.

The family of Janet S. Sands created this Life Tributes page to make it easy to share your memories.

Send flowers to the Sands family.