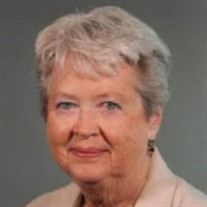 Janet Sue Koehlinger, 85, of Warren, passed away on Wednesday, January 5, 2022 at Visiting Nurse and Hospice Home, Ft. Wayne, IN. Janet was born on September 8, 1936 in Huntington, IN, the daughter of Paul Riggs and Berniece (Hippensteel) Riggs. She graduated from Warren High School in 1954 and married Robert A. Koehlinger on December 30, 1961. Janet completed a retail executive training course from Wolf & Dessauer in Ft. Wayne, IN where she became a buyer and retail store manager. Survivors include her three daughters, Pamela (Michael) Callahan of North Manchester, IN, Dawn Costin of Columbus, OH, Catherine (Gary) Bilsland of Carmel, IN; son, Christopher (Melissa) Koehlinger of Sarasota, FL; nine grandchildren and nine great grandchildren, who were all very special to her; two sisters, Barbara Souder of Warren, IN, Emmalou (Stuart) Dinken of Ft. Wayne, IN. She is preceded in death by her husband, Robert A. Koehlinger, and her parents, Paul and Berniece Riggs. Her career days were in retail management with Wolf & Dessauer, LS Ayres and Gass' Ladies Shop. After retiring to Venice, FL, she and her husband worked 10 years for Nielsen Media Research in computer data research. Janet and Bob returned to Huntington in 2006 where they did volunteer work for the hospital as well as in church and other community organizations. They loved spending winter months with family and friends in Venice, FL. Janet was a member of Trinity Methodist Church in Huntington, and a previous member and Elder in the Presbyterian church in Huntington, IN and Venice, FL. She was a member of DAR, VFW Aux., Friends of the Library in Huntington and the American Legion Aux. in Venice, FL. Throughout past years in Huntington, she served as a director for Love, Inc. for 3 years. She was active in American Business Women and Elk Ladies where she served as president. While living in Venice, FL she was active in the Elks Lodge and the South Venice Yacht Club where she served as secretary. Janet enjoyed music, dancing, reading, going to the beach and watching sunrises and sunsets. She loved animals and birds. She always thought the birds were the angels of the earth and cared for them in her yard and surroundings. Listening to music was a daily part of her and her husband's life. God, family, friends, children, and her dog, Taffy, were her greatest loves and always in her prayers Memorial Services will be held at 1:00 pm on Tuesday, January 11, 2022 followed by Visitation until 3:00 pm at Bailey-Love Mortuary, 35 West Park Drive, Huntington, IN. Preferred memorials may be made in memory of Janet to Love, Inc., the Boys and Girls Club of Huntington County, or Heritage Pointe of Warren., in care of Bailey-Love Mortuary, 35 West Park Drive, Huntington, IN, 46750. Please sign the online guest book at www.baileylove.com. Bailey-Love Mortuary is honored to serve the family of Janet Sue Koehlinger.

Janet Sue Koehlinger, 85, of Warren, passed away on Wednesday, January 5, 2022 at Visiting Nurse and Hospice Home, Ft. Wayne, IN. Janet was born on September 8, 1936 in Huntington, IN, the daughter of Paul Riggs and Berniece (Hippensteel)... View Obituary & Service Information

The family of Janet Sue Koehlinger created this Life Tributes page to make it easy to share your memories.

Janet Sue Koehlinger, 85, of Warren, passed away on Wednesday,...

Send flowers to the Koehlinger family.