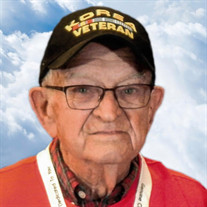 Jack Garland Sell, age 88, of Huntington, died at 6:17 p.m. Tuesday, December 10, 2019 at his home. Visitation will be from 3 – 7 p.m. Friday, December 13, 2019 at Bailey-Love Mortuary, 35 West Park Drive, Huntington, Indiana. Funeral services will be held at 11 a.m. Saturday, December 14, 2019 at New Hope United Church of Christ, 9160 West 800 North, Huntington, with Rev. Melinda Kammerer Petek and Rev. Larry Holderbaum officiating and military funeral rites performed by VFW Post #2689 of Huntington. There will be one hour of visitation prior to the service. Burial will be at a later date in Fairview Cemetery in Servia, Indiana. Preferred memorials are to New Hope United Church of Christ, Northeast Indiana Honor Flight, or Historic Forks of the Wabash, in care of Bailey-Love Mortuary, 35 West Park Drive, Huntington, Indiana, 46750. Jack was born on August 12, 1931 in Bippus, the son of Garland G. and Flora Marie (Hansel) Sell. He graduated from Bippus High School in 1949 and served as a Corporal in the United States Army during the Korean War. He went on to graduate from Ball State Teachers College and later earned a Master’s degree in 1963. He married Alice C. Meyer on December 27, 1952 in Greensburg, Indiana. Jack began his 35-year teaching career in Huntington County; he retired in 1990 from the Whitley County Consolidated School Corporation. He co-owned Bippus Farm Supply with his father and was a member of New Hope United Church of Christ in Bippus, where he served on the Conference Board of Directors. He served on the Miriam Board of Church Camps and was Past President of Bippus Lion’s Club. He was a member of American Legion Post #7 in Huntington and was actively involved with Habitat for Humanity, United Way, and Historic Forks of the Wabash. He volunteered with the Bippus Fire Department and was a member of the Indiana Volunteer Fire Association. He enjoyed following high school athletics and coached youth baseball leagues for 35 years. He was a member of both the Huntington County and Indiana Retired Teachers Associations. Jack enjoyed fishing on Sechrist Lake and he loved spending time with his family. Survivors include his wife of 66 years, Alice C. Sell of Huntington, a son, Michael (Brigitte) Sell of Bippus, a daughter, Elizabeth (Carl) Ring of Fort Wayne, a brother, Marland (Mary) Sell of Warren, six grandchildren and 14 great grandchildren. His parents precede him in death.

The family of Jack Garland Sell created this Life Tributes page to make it easy to share your memories.

Send flowers to the Sell family.