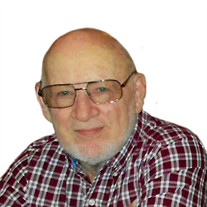 Jack Mills Hacker, 80, of Huntington, passed away at 12:16 pm Sunday, April 24, 2022 at Markle Health & Rehabilitation. Jack was born on January 12, 1942 in Huntington, IN, the son of Neil Hacker and Evelyn (Mills) Hacker. He graduated from Lancaster High School with the Class of 1960 and married Carole A. (Trook) Heyde on October 22, 1977 in Huntington, IN. He served in the United States Army from 1964 to 1966, was a member of the American Legion Post 7, and was a member of the Lancaster Cemetery Board. Jack worked for his family business, Majenica Tile Company until 1986. He then worked as a Heavy Equipment Operator at T & G Construction in Ft. Wayne, and Liberty Construction in Ft. Wayne, retiring in 2002. Jack was an avid NASCAR fan and he loved to go RVing with his wife. He enjoyed riding motorcycles and he loved to race motorcycles. He also liked to snow and water skiing. Survivors include his Wife, Carole A. Hacker of Huntington, IN; Two Sons, Richard (Dawn) Hacker of Monticello, IN, David (Heather) Hacker of Huntington, IN; Daughter, Joy (Don) Conley of Huntington, IN; Two Brothers, Joe (Lois) Hacker of Warren, IN, Bob (Sandy) Hacker of Huntington, IN; Eight Grandchildren, Zachery Hacker, Caleb Hacker, Nicholas Hacker, Grant Hacker, Austin Hampel, Evan Hampel, Michelle Storms, Elizabeth Ringer; Four Great Grandchildren, Xavier Storms, Madison Storms, Hudson Hacker, Boden Ringer; Brother-in-law, John Trook of Huntington, IN. He is preceded in death by his Father, Neil Hacker, and Mother, Evelyn Hacker. Private family services will be held. Preferred memorials may be made in memory of Jack to the Huntington County Humane Society, in care of Bailey-Love Mortuary, 35 West Park Drive, Huntington, IN, 46750. Please sign the online guest book at www.baileylove.com. Bailey-Love Mortuary is honored to serve the family of Jack Mills Hacker.

Jack Mills Hacker, 80, of Huntington, passed away at 12:16 pm Sunday, April 24, 2022 at Markle Health & Rehabilitation. Jack was born on January 12, 1942 in Huntington, IN, the son of Neil Hacker and Evelyn (Mills) Hacker. He graduated from... View Obituary & Service Information

The family of Jack Mills Hacker created this Life Tributes page to make it easy to share your memories.

Send flowers to the Hacker family.