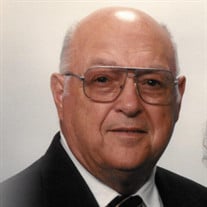 J. Donald Killen, 98, of Huntington, passed away at 5:27 am Wednesday, May 12, 2021 at his residence with family at his side. Don was born November 5, 1922 in Huntington, IN to Jay R. and Lena (Woods) Killen. He graduated from Monument City High School in 1940 as Class President, playing basketball and baseball. He married Joyce Elaine Baker, daughter of Harry and Dorothy (Rockwell) Baker on May 7, 1949 in Lawrenceville, PA. Joyce preceded him in death May 7, 1957. On October 3, 1959 Don and Joan “Jo” Gaisford, daughter of J. Ivan and Ruth (Slagle) Gaisford of Wooster, OH. were united in matrimony in Huntington, IN. Jo preceded him in death October, 28, 2014. Don was a lifelong grain and livestock farmer in Polk Township on the Centennial family farm raising horses, milk cows, hogs and a large sheep flock. He was a land conservationist involved with early no-till and minimum till methods with Purdue University. Don served on the Board of Directors for Mt. Etna Cemetery Association for over 50 years as well as Indiana Farm Bureau, Red Cross, Huntington College Trustees, Board of Zoning Appeals and Drainage Board. He was active in politics and supported the 4H and Boy Scouts. Don was a 75 year member of the Mt. Etna Masonic Lodge #333, a 53 year member of the Ft. Wayne Scottish Rite and a 50 year member of the Mizpah Shrine Temple. He attended Pilcher's Chapel United Methodist Church and First Presbyterian Church Huntington serving as Deacon. Don was lifelong adventurer, hunter and was known for his storytelling. Don was a private pilot owning two planes and an avid motorcyclist, traveling the continental USA, Canada, and Mexico with family and friends. His hobbies included engineering, carpentry, cookouts and watching his grandchildren's basketball, baseball and soccer games. Survivors include his son, Daniel K. (Jessica) Killen; daughter, Kathy Wilson; son, M. Paul (Laura) Killen; daughter, Melissa (Ron Foreman) Killen, and daughter in law, Marilyn Killen; Fourteen grandchildren; Seventeen great grandchildren; and sister in law, Karen Irwin. He is preceded in death by his spouses, Joyce Elaine and Joan Killen; parents, Jay R. and Lena Killen, son, Kent Killen, son in law, Rex Wilson, brother, Merritt Killen, sister, Shirley (Killen) Pugh, sister in laws, Lorraine Price and Donna Moore, brother in laws, Don Irwin, Gene Price, Ed Moore and Russel Pugh. Visitation will be from 3:00 pm - 7:00 pm Sunday, May 16, 2021 at Bailey-Love Mortuary, 35 West Park Drive, Huntington, IN. Funeral services will be held at 10:00 am Monday, May 17, 2021 at Bailey-Love Mortuary with Pastor Micah Mobley officiating. Masonic services will also be held during the Funeral service. There will be one hour of visitation prior to the service. Burial will be in Mt. Etna Cemetery in Huntington. Preferred memorials in lieu of flowers may be made to the Mt. Etna Cemetery, Shriners Hospitals for Children or Pilcher's Chapel United Methodist Church, in care of Bailey-Love Mortuary, 35 West Park Drive, Huntington, IN, 46750. Please sign the online guest book at www.baileylove.com . Bailey-Love Mortuary is honored to serve the family of J. Donald Killen.

J. Donald Killen, 98, of Huntington, passed away at 5:27 am Wednesday, May 12, 2021 at his residence with family at his side. Don was born November 5, 1922 in Huntington, IN to Jay R. and Lena (Woods) Killen. He graduated from Monument City... View Obituary & Service Information

The family of J. Donald Killen created this Life Tributes page to make it easy to share your memories.

Send flowers to the Killen family.