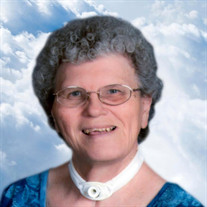 Helen Marie Miller, age 72, of Angola, died at 10:40 a.m. Tuesday, June 9, 2020 at Parkview Hospital Randallia in Fort Wayne. Visitation will be from 2 p.m. – 6 p.m. Sunday, June 14, 2020 at Bailey-Love Mortuary, 35 West Park Drive, Huntington, Indiana. Funeral services will be held at 10 a.m. Monday, June 15, 2020 at Bailey-Love Mortuary with Pastor Jeffrey Teeple officiating. There will be one hour of visitation prior to the service. Entombment will be in Gardens of Memory in Huntington County. For anyone unable to attend the service, there will be a memorial service held at 2 p.m. Saturday, June 27, 2020 at Peace Lutheran Church, 355 East State Road 120, Fremont, Indiana. Preferred memorials are to Wee Creations Pre-School and Daycare at Peace Lutheran Church in Fremont, Steuben County Lake Council Scholarship Fund, or the donor’s choice of Fremont, Orland, Salem Center, or Angola Fire Departments, in care of Bailey-Love Mortuary, 35 West Park Drive, Huntington, Indiana, 46750. Helen was born on February 20, 1948 in Decatur, the daughter of Hilbert and Marie (Berning) Hockemeyer. She graduated from Monmoth High School in 1966 and married Kenneth H. Miller, Sr. on March 1, 1986 in Huntington. Helen worked for GTE/Verizon in Fort Wayne as a key punch operator for 25 years. She was a member of Peace Lutheran Church in Fremont, where she was on the Board of Education. She was a member of West Otter Lake Association, Membership Vice President of Steuben County Lake Council, and Thrivent Financial of Angola. Helen was a coordinator of the EDGE Gift Card fundraiser for the Wee Creations Preschool, Annual Easter Breakfast at her church, volunteered with Santa’s Helpers, and helped with the Lake Association Directory. She enjoyed reading and collecting Nicholas Sparks books, playing a variety of Solitaire, Tri-Ominos, Rummikube, and Racko. She is survived by her husband of 34 years, Kenneth H. Miller of Angola, daughters Sara J. (Rodney) Wilson of Celina, Ohio, Cynthia (Keith) Tobin of Huntington, a son David A. Baumgartner of Huntington, a sister Alice Beltran of Fair Oaks, California, and brothers Don Hockemeyer of Decatur, Indiana and Richard Hockemeyer of Springfield, Ohio. Also surviving are stepdaughters Rhonda (Steve) Herkins of Malvern, Pennsylvania and Debra (Keith) Ferguson of Port Charlotte, Florida, a stepson, Kenneth Miller of Bradenton, Florida, 12 grandchildren, and seven great grandchildren. She is preceded in death by her parents and a sister, Carol Hackman.

The family of Helen Marie Miller created this Life Tributes page to make it easy to share your memories.

Send flowers to the Miller family.