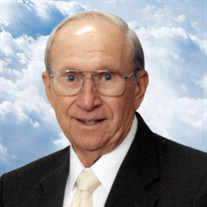 Harry C. James Jr., age 86, of Columbia City, formerly of Huntington, died at 9:11 p.m. Wednesday, January 8, 2020 at Parkview Randallia Hospital in Fort Wayne. Visitation will be from 3 – 7 p.m. Monday, January 13, 2020 at Bailey-Love Mortuary, 35 West Park Drive, Huntington, Indiana. Funeral services will be held at 10 a.m. Tuesday, January 14, 2020 at Bailey-Love Mortuary with Rev. Gus Hacker officiating. There will be one hour of visitation prior to the service. Burial will be in Gardens of Memory in Huntington County with military graveside rites performed by VFW Post #2689 of Huntington. Preferred memorials are to First Brethren Church of Huntington, in care of Bailey-Love Mortuary, 35 West Park Drive, Huntington, Indiana, 46750. Harry was born on October 6, 1933 in Warren, the son of Harry C. James Sr. and Lulu Belle (Crum) James. He graduated from Huntington High School in 1951 and served in the United States Navy during the Korean War. He married Esther E. Kellems on April 2, 1955 in Huntington. Harry attended Raedel College in Fort Wayne and worked as an electrician for Baldwin Eheret Hill in Huntington from 1954-1967. In 1995, he retired after working for Huntington County Community School Corporation since 1967 as an electrician. He was a member of First Brethren Church of Huntington. Harry enjoyed hunting, trapshooting, fishing, and collecting coins. He loved his family, especially his grandchildren and great grandchildren. Survivors include his wife of 64 years, Esther E. James of Huntington, a son, Thomas D. James of Leo, daughters Cynthia (Dennis) Beard of Holland, Michigan and Joni (Duane) Kilty of Lexington, Kentucky, nine grandchildren, and 15 great grandchildren. He is preceded in death by his parents and brothers Charles F. James and Donald James.

The family of Harry C. James Jr. created this Life Tributes page to make it easy to share your memories.

Send flowers to the James family.