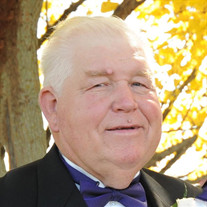 Harley M. “Sonny” Henline II, age 72, of Huntington, passed away at 12:10 p.m. on Saturday, July 13, 2019 at Visiting Nurse and Hospice Home in Fort Wayne. Visitation will be from 3 – 7 p.m. Wednesday, July 17, 2019 at Bailey-Love Mortuary, 35 West Park Drive, Huntington, Indiana. Funeral services will be held at 10 a.m. Thursday, July 18, 2019 at Bailey-Love Mortuary with Pastor Joel Yeager officiating. There will be one hour of visitation prior to the service. Burial will be in Pleasant Chapel Cemetery in Huntington County. Preferred memorials are to the donor’s choice, in care of Bailey-Love Mortuary, 35 West Park Drive, Huntington, Indiana, 46750. Sonny was born on December 4, 1946 at Huntington Hospital, the son of Harley and Ruth (Ellet) Henline. He was a graduate of Huntington High School. After graduating, he went on to proudly serve in the United States Army in West Berlin. He was united in marriage to Deidre “Dee” Couch on November 14, 1970 at St. Peter’s Lutheran Church; she preceded him in death on September 13, 2011. Sonny has worked alongside his dad in the family wrecker business, Henline Heavy Tow and Retrieve, since he was a month old. Later, he went on to co-own the business with his wife and later his son, Harley III. He was a long-time member, director, and former vice-president of the Indiana Towing and Wrecker Association. He was a statewide heavy-duty rescue and extrication instructor for many years and was an active supporter of the Huntington 4-H Robotics program. He was also a supporter of St. Peter’s Lutheran Church, and in recent years, he attended Pleasant Chapel United Methodist Church. In his free time, Sonny enjoyed spending time with his grandchildren, family and friends, woodworking, attending antique truck and tractor shows, making the baked beans for the annual tenderloin supper, and telling jokes and stories to anyone that would listen. Survivors include his son, Harley (Ann) Henline III, grandchildren Hannah and Harley IV, and many nieces and nephews. He is preceded in death by his parents, wife, and his brother, Donald Henline.

The family of Harley M. "Sonny" Henline II created this Life Tributes page to make it easy to share your memories.

Send flowers to the Henline family.