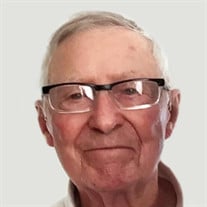 Glenn Hall, Jr., 88, of Huntington, passed away at 6:37 pm Friday, January 15, 2021 at Parkview Regional Medical Center. Glenn was born on August 16, 1932 in Marion, IN the son of Glenn Hall Sr. and Virgie (Lakin) Hall. He married Marie M. Cowart on September 6, 1969 in Andrews, IN. Glenn was a US Army Veteran, serving during the Korean War. He retired from ABF Freight Systems and was a member of the Moose Lodge 837 and the American Legion Post 7. He was an avid Golfer and was the biggest I.U Basketball fan there ever was. Survivors include loving wife, Marie M. Hall of Huntington, IN; Five Daughters, Debra (Randy) Chelf of Greenwood, IN, Terry (Joe) Jonaitis of Fairbanks, AK, Julie (Dan) Carey of Alexandria, IN, Tracy (Rocky) Rogers of Lowndes, MO, Jill (John) Pluckebaum of Traverse City, MI; Son, Rick (Theresa) Dailey of Huntington, IN; Son In-Law, Terry Stoffel of Huntington, IN; 21 Grandchildren and 3 Great Grandchildren. Glenn is preceded in death by his Father, Glenn Hall, Sr., Mother, Virgie Hall, Daughter, Vicki Stoffel, Four Brothers, a Sister and 2 Grandchildren. Private Services will be held, and a Memorial Service will be held at a later date. Preferred memorials may be made in memory of Glenn to any organization of the donor's choice, in care of Bailey-Love Mortuary, 35 West Park Drive, Huntington, IN, 46750. Please sign the online guest book at www.baileylove.com. Bailey-Love Mortuary is honored to serve the family of Glenn Hall, Jr.

The family of Glenn Hall Jr created this Life Tributes page to make it easy to share your memories.

Send flowers to the Hall family.