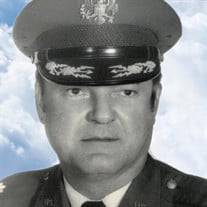 George Robert Krieg, age 90, of Warren, passed away peacefully and surrounded by his family, at 6:18 p.m. Tuesday, January 29, 2019 at Parkview Huntington Hospital. Visitation will be from 10 a.m. – 12 p.m. Monday, February 4, 2019 at Bailey-Love Mortuary, 35 West Park Drive, Huntington, Indiana. Funeral services will immediately follow at 12 p.m. Monday at Bailey-Love Mortuary with Rev. Bill Rapp officiating. Burial will be in Monument City Cemetery in Huntington County with military graveside rites performed by VFW Post #2689 of Huntington. Memorial contributions in honor of George can be given to Huntington University, in care of Bailey-Love Mortuary, 35 West Park Drive, Huntington, Indiana, 46750. George was born on July 14, 1928 in Fort Wayne, the son of Richard Olney and Mary Alma (Welker) Krieg. He was a 1946 graduate of Bippus High School and he married the love of his life, Patricia A. Bailey on January 15, 1949 in Marion. He graduated from Huntington College in 1950 and earned a Master of Science degree from Stanford University in 1958. He served 21 years in the United States Air Force, and was a veteran of the Cold War and Vietnam. He retired as a Lieutenant Colonel at Wright-Patterson Air Force Base in Dayton, Ohio, in November 1985. He was a member of American Legion Post #286, the Retired Officers Association, the National Association of Uniformed Services, and was a former member of the Association of Old Crows. George enjoyed fishing and spending time with his wife of 70 years as well as his beloved granddaughter. He never met a stranger and will always be remembered for his sense of humor. Survivors include his wife, Patricia A. Krieg of Warren, sons Garrett Lee (Lori) Krieg of Dayton, Ohio and John Vincent (Elaine) Krieg of Houston, Texas, and his granddaughter, Kailyn Leigh (Jordan) Kline of Toledo, Ohio. His parents, Richard Olney and Mary Alma, precede him in death

The family of George Robert Krieg created this Life Tributes page to make it easy to share your memories.

Send flowers to the Krieg family.