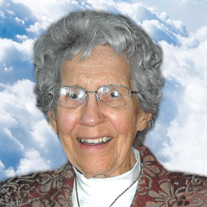 Esther M. Andrews (Born) 100, formerly of Huntington, passed away on Saturday, September 29, 2018. She had been living with her daughter and son-law, Elizabeth and Steven Scheer since 2013. Esther was born January 2, 1918 to Forrest E. and Anna S. Born and was a native of Whitley County. She graduated from Columbia City High School. Esther married Paul N. Andrews of Huntington on March 28, 1941 at St. Peter’s Reformed Church (later St. Peter’s United Church of Christ). Their marriage lasted 62 years until Paul’s death in 2003. During World War II, Esther was employed by the United States Navy as an inspector at the Hosdreg Company in Huntington. After the War she and Paul purchased and operated the Northside Super Service filling station and later Northside Texaco. They raised four daughters. Esther also worked in the accounting department at Sealtest and then worked at the Huntington County Treasurer’s office as a clerk many years until her retirement. She was always an active community volunteer including school room mother, Girl Scout troop leader, Sunday school teacher and Job’s Daughters chaperone. She was on the Associated Churches Board and served as secretary for 23 years as well as serving on the Huntington Hospital Board. After retirement Esther volunteered at LOVE Inc., the Literary Council, the Huntington Hospital gift shop, Friends of the Library, and The Heritage of Huntington, where she delivered books to the residents. Esther leaves behind her four daughters, Martha Poole (Hoyt) of Glastonbury, Connecticut; Emily Andrews-Carrico (John) of Bloomington; Susan Cowan (Michael) of Steamboat Springs, Colorado; and Elizabeth Scheer (Steven) of Franklin. She is also survived by eight grandchildren and four great-grandchildren and her brother-in-law James L. Andrews of Livonia, Michigan. Esther was preceded in death by her parents and three siblings: Ralph C. Born, Mildred A. Egolf, and Robert E. Born. A memorial service for Esther will be held at Bailey-Love Mortuary in Huntington on Saturday, January 5, 2019 with family visitation at 1 pm. and service at 2 pm. Reverend Raymond Scribner, former pastor of St. Peter’s First United Church of Christ will officiate. Graveside service for immediate family will follow. In lieu of flowers memorial contributions can be made to LOVE, Inc. of Huntington, a local food pantry ministry.

Esther M. Andrews (Born) 100, formerly of Huntington, passed away on Saturday, September 29, 2018. She had been living with her daughter and son-law, Elizabeth and Steven Scheer since 2013. Esther was born January 2, 1918 to Forrest E. and... View Obituary & Service Information

The family of Esther M. Andrews created this Life Tributes page to make it easy to share your memories.

Send flowers to the Andrews family.