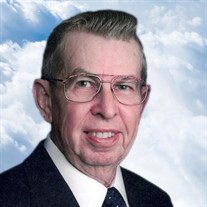 Donald Gene Thrift, 87, of Lancaster, passed away at his home surrounded by his wife and children on September 6, 2019. He leaves behind a legacy of enduring faith and devotion to family. Don was a lifelong resident of Huntington County, except his years of service in the Army during the Korean War. He was born in Jefferson Township to Roy F. and Belma E. (Payne) Thrift on March 19, 1932. He graduated from Lancaster High School in 1951. He was preceded in death by his parents and brother, Charles J. Thrift. He met his sweetheart, Wanda L. (Stetzel) Thrift, at the 4-H Fair when they were in their early teens. They married on August 3, 1952 and were inseparable for the 67 years that followed. Together they raised 3 children: David (Pam) Thrift, Pam (Pat) Thompson, and Beth (Bob) Thompson. Don valued family and took great pride in his eight grandchildren, Nicolé (Darren) Johnson, Angie (Shane) Eltzroth, Tracy (Todd) Hillwig, Heather Thrift, Stephanie Thompson, Michael (Sandy) Thrift, Joel Thompson, and Christina (Steven) Yoder, and 15 great-grandchildren. He patiently taught them his own ethic of hard work, commitment, and the necessity of having fun when the work was done. Don farmed, working alongside his father and his wife, son, and daughters to raise livestock. He was an electrician for Corning Glass Co. in Bluffton and retired from General Motors in Marion in 1995. He attended Lancaster Wesleyan Church, where his grandfather had been a pastor and his family has worshipped the Lord for six generations. Visitation will be held Wednesday, September 11, 2019 from 10 a.m. – 2 p.m. at Bailey-Love Mortuary, 35 West Park Drive, Huntington, Indiana with the funeral service officiated by Pastor Kim Holloway following at 2 p.m. Burial will be at Lancaster Cemetery. Memorial donations may be given to Lancaster Wesleyan Church or Visiting Nurse and Hospice, in care of Bailey-Love Mortuary, 35 West Park Dr., Huntington, Indiana, 46750.

Donald Gene Thrift, 87, of Lancaster, passed away at his home surrounded by his wife and children on September 6, 2019. He leaves behind a legacy of enduring faith and devotion to family. Don was a lifelong resident of Huntington County, except... View Obituary & Service Information

The family of Donald Gene Thrift created this Life Tributes page to make it easy to share your memories.

Donald Gene Thrift, 87, of Lancaster, passed away at his home...

Send flowers to the Thrift family.