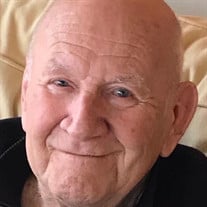 Donald S. Goodine, age 91, of Huntington, IN passed away on Monday, September 28, 2020 at Parkview Huntington Hospital. He was born on June 17, 1929 in Barre, VT to the late Albert S. Goodine and Gladys (Budrow) Goodine. Donald graduated from Marshfield High School in Marshfield, VT with the class of 1948 and then married Alberta (Spooner) Goodine in 1952. Donald worked as a Data Storage Librarian for the State of Vermont for 21 years. Don and his wife Alberta moved to Huntington in 2005. Donald proudly served in the United States Navy on the USS Midway Aircraft Carrier during the Korean War. He was a member of the Huntington First Church of the Nazarene, and the Websterville Baptist Church in Websterville, VT. He was a Volunteer with the Marshfield Fire Department, was a Selectman for the Town Government in Marshfield, and was an active member of the Scratch and Dent Moving Club. Donald was widely known for his magnificent vegetable garden. Don found joy in helping others. At an early age he would shovel snow, fill wood boxes and do errands for older neighbors until he went off to the Navy at 18. While in high school Don traveled one summer to Kansas with his friends Hap Hayward and Rich Houghton to work the wheat harvest. He is survived by his loving wife, Alberta S. Goodine of Huntington, IN; his three daughters, Donna Bailey Lahr and her husband Gene of Huntington, IN; Janet Goodine of Indio, CA; and Patricia Goodine Baker and her husband Ronald of Storrs Mansfield, CT; his son, Robert Goodine and his wife Debbi of Green Bay, WI; his sister, Beverly LeBeau of Essex, VT; his nine grandchildren; and his nine great grandchildren. Donald was preceded in death by his parents, Albert S. Goodine and Gladys (Budrow) Goodine; and his three brothers, Robert Wayne Goodine, Allen Goodine, and Clarence Goodine. Visitation will be from 10 am – 12 pm on Friday, October 2, 2020 with Funeral Services held at 12 pm at Bailey-Love Mortuary, 35 West Park Drive, Huntington, IN. Memorial contributions may be made to Websterville Baptist Christian School in care of Bailey-Love Mortuary, 35 West Park Drive, Huntington, Indiana. Online condolences can be given at www.baileylove.com.

Donald S. Goodine, age 91, of Huntington, IN passed away on Monday, September 28, 2020 at Parkview Huntington Hospital. He was born on June 17, 1929 in Barre, VT to the late Albert S. Goodine and Gladys (Budrow) Goodine. Donald graduated from... View Obituary & Service Information

The family of Donald S. Goodine created this Life Tributes page to make it easy to share your memories.

Donald S. Goodine, age 91, of Huntington, IN passed away on Monday,...

Send flowers to the Goodine family.