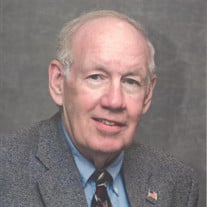 David Lawrence Brewer, 84, of Huntington, passed away at 1:22 am on Thursday, September 9, 2021, at Parkview Regional Hospital, Ft. Wayne, IN. David was born on November 24, 1936 in Cleveland, OH. He was the son of Arthur Brewer and Rhea (Brown) Brewer. He was a 1955 graduate of Emerson High School in Gary, IN, a 1958 graduate of Culver-Stockton College in Canton, MO, a 1959 graduate of Indiana University - Bloomington where he earned his B.S. Degree in Business, and a 1963 graduate of IU School of Law in Bloomington where he earned his Juris Doctor Degree. David married Susan C. Stimson on August 12, 1961 at the 43rd Avenue Presbyterian Church in Gary, IN. David started working as a teacher at the Tolleston Grade School in Gary, IN. He was then accepted to practice Law in the State of Indiana in 1963, the Indiana Northern District Federal Court in 1964, the U.S. Tax Court in 1972, and the U.S. Supreme Court in 2003. He was an Associate Member at Bowers, Feightner & Palmer from 1963-1964, and was a Partner at Palmer, Bowers & Brewer from 1965-1991. In 1991 the firm's name changed to Bowers, Brewer, Garrett & Wiley where he worked until 2007 when he became Of Counsel with Bowers, Brewer, Garrett & Wiley, LLP until his death. David's work also included: Deputy Prosecutor for Huntington County, Counsel for Huntington County Board of Aviation Commissioners, Counsel for Huntington County Welfare Department, Director and Chairman of the Board for Bippus State Bank, and was Chairman of the Huntington County Child Protection Team. David was also licensed to sell life insurance and title insurance in the State of Indiana. David’s professional memberships included: member of the Huntington County Bar Association where he served as treasurer, vice president and president, the American Bar Association, the Ball State University Foundation Philanthropy Advisory Committee, the Indiana State Bar Association Client Security Fund, and the Investments Unlimited Investment Club. David was involved with many organizations including the Huntington Jaycees, March of Dimes, Pathfinder Services, Inc, United Way of Huntington County, Huntington County Medical Memorial Foundation, Huntington County Chamber of Commerce, where he served as director, Salvation Army of Huntington, Huntington County Chapter of Citizens for Decent Literature, Huntington Kiwanis Club, and the Huntington County Community Development Committee. David also served as the general chairman for the Commitment for a Brighter Future Campaign at Huntington Memorial Hospital as well as the Republican chairman for the City of Huntington. David also volunteered his time as coach for the Kim League Basketball (YMCA), director and membership campaign chairman for the Forester Basketball Club at Huntington College, director of the Huntington County 4-H Fair Board, co-chairman of the Lafontaine Center Drive, director, secretary, and vice president of the Pathfinder Foundation, Inc., director and president of the Dan Quayle Commemorative Foundation, Inc., Boy Scouts Annual Fund Drive, and served on the advisory board and also as director at the Victory Noll Center, Inc. David was a member of the First Presbyterian Church of Huntington where he served as a deacon, elder, and the Boy Scout Institutional Representative; he also served as director, secretary, vice president, and president of the First Presbyterian Church of Huntington Foundation. David was also a part of many fraternal organizations including the Huntington Elks Lodge, Masonic Lodge (Amity Lodge #483 F&AM), the Scottish Rite, the Accepted Scottish Rite Valley of Ft. Wayne, Shrine Mispah Temple AAONS of Ft. Wayne, Sigma Phi Epsilon Social Fraternity and the Phi Delta Phi Legal Fraternity. Throughout David’s lifetime, he earned several awards including the Huntington Jaycees Distinguished Service Award, Indiana Jaycees 50 Year Member, the Charles Burgess Award from the Huntington Kiwanis Club, Chief of the Flint Springs Tribe, and the Herbert LaMont Award from Pathfinder Services. David was also published through many biographical publications including Indiana Lives, Outstanding Young Men of America, Community Leaders of America, Personalities of the West and Midwest, Who's Who in the Midwest and Who's Who in America. David started his passion for farming with Jay Allen, and continued farming with his son, John, and grandson, Trevor, throughout his life. He also enjoyed fishing, reading, golfing, playing bridge, and spending time with his family and grandchildren. He loved taking trips with his children to Vermont and Disney World. A favorite pastime also included fishing trips with his wife, Susan, and dear friends, John and Delene Regan to Canada. Survivors include his Wife, Susan C. Brewer of Huntington, IN; two sons, John S. (Jessica) Brewer of Huntington, IN, Michael D. (Ginni) Brewer of Warren, IN; daughter, Anne M. Betterly of Huntington, IN; four grandchildren, Trevor Brewer, Nolan, Arianna, and Gabriella Betterly. He is preceded in death by his father, Arthur V. Brewer, mother, Rhea C. Brewer, sister, Jean Pryor, and brother, John Brewer. Visitation will be from 2:00 pm - 7:00 pm, on Thursday, September 16, 2021 at Bailey-Love Mortuary, 35 W. Park Dr., Huntington, IN. Funeral services will be held at 11:00 am on Friday, September 17, 2021 at the First Presbyterian Church of Huntington with Pastor John Beehler officiating. There will be one hour of visitation prior to the service. Burial will be at a later date at the Mt. Hope Cemetery in Huntington. Preferred memorials may be made in memory of David to the Quayle Center, or The David and Susan Brewer Family Community Foundation Funds, in care of Bailey-Love Mortuary, 35 West Park Drive, Huntington, IN, 46750. Please sign the online guest book at www.baileylove.com. Bailey-Love Mortuary is honored to serve the family of David Lawrence Brewer.

David Lawrence Brewer, 84, of Huntington, passed away at 1:22 am on Thursday, September 9, 2021, at Parkview Regional Hospital, Ft. Wayne, IN. David was born on November 24, 1936 in Cleveland, OH. He was the son of Arthur Brewer and Rhea (Brown)... View Obituary & Service Information

The family of David L. Brewer created this Life Tributes page to make it easy to share your memories.

Send flowers to the Brewer family.