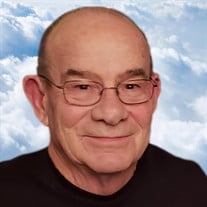 Charles R. “Charlie” Topp, age 73, of Huntington, died at 7:10 p.m. Thursday, March 21, 2019 at Visiting Nurse and Hospice Home in Fort Wayne. Visitation will be from 10 – 12 p.m. Wednesday, March 27, 2019 at Bailey-Love Mortuary, 35 West Park Drive, Huntington, Indiana. Funeral services will immediately follow at 12 p.m. Wednesday at Bailey-Love Mortuary with Father Steve Colchin officiating. Burial will be in Glenwood Cemetery in Roanoke with military graveside rites performed by the United States Marine Corps. Preferred memorials are to Visiting Nurse and Hospice Home, in care of Bailey-Love Mortuary, 35 West Park Drive, Huntington, Indiana, 46750. Charlie was born on March 3, 1946 in Fort Wayne, the son of Charles A. and Inez Topp. He was a 1964 graduate of Elmhurst High School in Ft. Wayne and served as a Corporal in the United States Marines during the Vietnam War. He married Barbara Ann Coe on January 6, 1968 in Roanoke; she preceded him in death on June 29, 2016. Charlie worked as a coal miner for Amax Coal in Gillette, Wyoming for eight years. In 2008, he retired from Huntington Lab/Ecolab after 31 years in the maintenance department. He served on the Huntington County Sheriff Department Reserve and was a Huntington County Rescue Technician for 16 years. He was a member of American Legion Post #160 in Roanoke and enjoyed collecting firearms and militaria. He is survived by a son, Brian J. (Nikki Swartz) Topp of Huntington and sisters Marian Machon of Fort Wayne, Judy Fouts of Colorado, and Loretta Hine of Roanoke. He is preceded in death by his parents, wife, a sister Jeanette Nine, and brothers Eugene Topp and Russell Topp.

The family of Charles R. "Charlie" Topp created this Life Tributes page to make it easy to share your memories.

Send flowers to the Topp family.