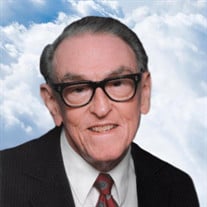 Dr. Carl D. Zurcher, age 96, of Huntington, died at 11:15 a.m. Friday, September 11, 2020 at Heritage Pointe of Huntington. Visitation will be from 3 – 7 p.m. Thursday, September 17, 2020 at Bailey-Love Mortuary, 35 West Park Drive, Huntington Indiana. Funeral services will be held at 11 a.m. Friday, September 18, 2020 at College Park United Brethren Church, 1945 College Avenue, Huntington, with Dr. Ray Seilhamer officiating. There will be one hour of visitation prior to the service. Burial will be in Mt. Hope Cemetery in Huntington County. Memorial contributions may be made to College Park United Brethren Church or Huntington University, in care of Bailey-Love Mortuary, 35 West Park Drive, Huntington, Indiana, 46750. Carl was born on January 18, 1924 near Berne, Indiana, the son of Fred F. and Martha (Valentine) Zurcher. He was a 1941 graduate of Geneva High School and served as a Corporal in the United States Army in the 104th Infantry (Timberwolf) Division in Holland, France, and Germany during World War II. He earned a Bachelor of Arts degree from Huntington College in 1948 and taught for one year at Huntington Township High School before completing his Master’s degree at the Northwestern University School of Speech in Evanston, Illinois in 1950. He married Mabel I. (Alpaugh) Thompson on June 5, 1951 in Kunkle, Ohio; she preceded him in death on February 10, 2018. He was awarded the PhD degree in Theatre by Purdue University in 1973. Dr. Zurcher retired a Professor Emeritus from Huntington College in 1989, having been a member of the faculty since 1950. He taught speech and theatre and directed numerous dramatic productions. He was Chairman of the Division of Humanities and Bible. At his retirement, he was awarded an honorary doctor’s degree by Huntington College. In 2003, the auditorium in the Merillat Centre for the Arts was named Zurcher Auditorium in his honor. For several years following his retirement, he was a teacher in the Adult Basic Education Program of Huntington County and a member of the Huntington County Literacy Coalition. He was a member of College Park United Brethren Church in Huntington and served on the Huntington College Alumni Board. Survivors include daughters Beverly Ann (Dan) Brauchler of Converse and Carla Jeanne Zurcher of Huntington, granddaughters Amber (Jeremy) Roberts and Ashley (Scott) Lindvall, both of Fishers, Indiana, great grandchildren Kensley Roberts, Avery Roberts, Madelyn Roberts, Elliana Lindvall, Connor Lindvall, and Emery Lindvall, and several nieces and nephews. He is preceded in death by his parents, his wife, sisters Lois Bluhm and Louise Zurcher, and a brother, Rev. Reuben Zurcher.

The family of Dr. Carl D. Zurcher created this Life Tributes page to make it easy to share your memories.

Send flowers to the Zurcher family.