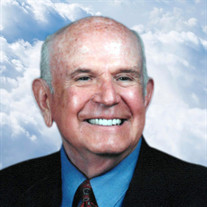 Carl E. Seely, age 94, of Fort Wayne, formerly of Huntington, died at 3:35 a.m. Monday, September 9, 2019 at Majestic Care of New Haven. Visitation will be from 3 – 7 p.m. Thursday, September 12, 2019 at Bailey-Love Mortuary, 35 West Park Drive, Huntington, Indiana. Funeral services will be held at 10 a.m. Friday, September 13, 2019 at Bailey-Love Mortuary with Rev. Raymond Scribner officiating. There will be one hour of visitation prior to the service. Burial will be in Mt. Hope Cemetery in Huntington with military graveside rites performed by VFW Post #2689 of Huntington. Preferred memorials are to Masonic Learning Center in Fort Wayne or Aldersgate United Methodist Church, in care of Bailey-Love Mortuary, 35 West Park Drive, Huntington, Indiana, 46750. Carl was born on May 17, 1925 in Huntington, the son of Dr. Carl D. Seely, D.D.S. and Grace (Mow) Seely. He graduated from Huntington High School in 1943 and served as a sergeant in the United States Army Air Corps during World War II. He married Suzanne E. Hummitch; she preceded him in death in 1962. He later married Marjorie Landrigan. Carl earned a bachelor’s degree from Huntington College and a master’s degree from the University of Indianapolis; he spent a sixth year at Ball State University studying Education. His teaching career began in 1950, having taught at Horace Mann, Tipton, and Lincoln Elementary Schools. He retired from Huntington County Community School Corporation in 1989 after many years as principal at Tipton, Riley, and Central Schools. He loved announcing for local high school sporting events. He was past president for Huntington Little League and served as an assistant football coach at Huntington High School for many years. He held memberships in several local organizations including Amity Masonic Lodge #483. He served on the Board of Directors for Huntington YMCA for many years. He was a member of both Huntington County Retired Teachers and Indiana Retired Teachers Associations. Survivors include his wife, Marjorie Seely of Fort Wayne, a son, Blaine B. (Susan) Seely of Fort Wayne, a daughter, Ann E. Seely of Dallas, Texas, and grandchildren Drew Seely of Fort Wayne and Chase Seely of Hartford, Connecticut. He is preceded in death by his parents, a son, Carl Eric Seely, a brother, Willis Seely, and a sister, Suzanne Wamsley.

The family of Carl E. Seely created this Life Tributes page to make it easy to share your memories.

Send flowers to the Seely family.