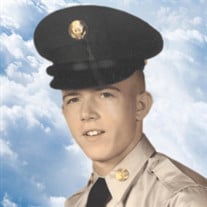 Buddy W. Chapin, age 75, of Huntington, died at 7:32 p.m. Saturday, May 18, 2019 at his home. Visitation will be from 3 – 7 p.m. Thursday, May 23, 2019 at Bailey-Love Mortuary, 35 West Park Drive, Huntington, Indiana. Funeral services will be held at 10 a.m. Friday, May 24, 2019 at Bailey-Love Mortuary with Pastor Mark Hoffer officiating. There will be one hour of visitation prior to the service. Burial will be in Gardens of Memory in Huntington County with military graveside rites performed by VFW Post #2689 of Huntington. Preferred memorials are to American Heart Association, in care of Bailey-Love Mortuary, 35 West Park Drive, Huntington, Indiana, 46750. Buddy was born on December 19, 1943 in Huntington, the son of Merle and Mable (Bowman) Chapin. He served in the United States Army during the Vietnam War. He married Sondra S. Poe on July 17, 1991 in Huntington. Buddy was a sheet metal worker and also worked in heating and air conditioning, retiring after 25 years. He was a member of Sheet Metal Workers Union Local #20 of Fort Wayne and attended Union Church in Huntington. He was an avid fisherman and he loved to play cards. Surviving in Huntington are his wife of 27 years, Sondra S. Chapin, sons Stacy (Regina) Chapin and Matthew Chapin, and a daughter, Misty L. (Donnie) Burns. Also surviving are brothers Dennis (Connie) Chapin of Huntington and Ronald (Sheila) Chapin of Roanoke, stepchildren Bob Williamson, Jay (Jill) Williamson, Larry Williamson, and Mike Williamson, all of Huntington, Tony Williamson of Fort Wayne, and Kim (Paul) Miller of Huntington, and numerous grandchildren and great grandchildren. He is preceded in death by his parents, brothers Larry Chapin and Ricky Chapin, a sister Sandra Horsley, a grandson, Andy Williamson, a granddaughter, Ashley Williamson, a stepdaughter Marjorie Manning, and a stepson, Scott Hill.

The family of Buddy W. Chapin created this Life Tributes page to make it easy to share your memories.

Send flowers to the Chapin family.