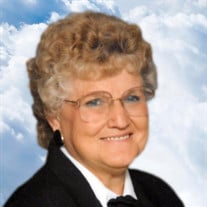 Bonnie L. Baker, age 89, of Huntington, died at 2:50 a.m. Friday, June 21, 2019 at Peabody Retirement Community in North Manchester. Visitation will be from 10 a.m. – 12 p.m. Thursday, June 27, 2019 at Bailey-Love Mortuary, 35 West Park Drive, Huntington, Indiana. Funeral services will immediately follow at 12 p.m. Thursday at Bailey-Love Mortuary with Rev. Raymond Scribner officiating. Burial will be in Andrews Riverside Cemetery at a later date. Preferred memorials are to the donor’s choice to benefit the welfare of children and animals, in care of Bailey-Love Mortuary, 35 West Park Drive, Huntington, Indiana, 46750. Bonnie was born on September 25, 1929 in Kokomo, the daughter of Virgil and Ruth (Kinch) Smuts. She married Junior France in 1946 and he preceded her in death. She married Tom Baker on August 21, 1954. Bonnie worked as a supervisor and purchasing agent at General Engineering; she also worked at Essex Wire in Andrews as a secretary and later became a purchasing agent for the company. In 1976, she began her work in the Huntington North High School cafeteria, where she became known as the “Lunch Lady.” She retired after 25 years of affectionately serving the students. She attended First Christian Church in Andrews for many years and later attended New Hope United Church of Christ in Bippus. Bonnie loved her family, especially her grandchildren. She enjoyed swimming, cooking, reading, traveling, and her two dogs, Cassie and Tinkerbell. She cared deeply for everyone and it was her mission to make sure people were happy and comfortable. She was like a ray of sunshine that everyone was attracted to. When anyone would come into her presence, she just made them feel better. She is survived by her husband of 64 years, Tom Baker of Huntington, sons Michael France of Fort Wayne and Terry France of Ormond Beach, Florida, daughters Melissa Baker and Melinda Baker, both of Huntington, and a sister, Donna Martin. Also surviving are grandchildren Tony Baker, Tosha Rumple, Maria Martin, Todd France, Traci Rivera, Stephanie Andrews, and Matt France, and 18 great grandchildren. She is preceded in death by her first husband, a son, Thomas Baker, brothers Danny Smuts, Robert Smuts, Herb Smuts, Rex Smuts, and Doug Smuts, and sisters Louise Lawson, Doris Benfatti, Peggy Smuts, and Wanda Mae Smuts.

The family of Bonnie L. Baker created this Life Tributes page to make it easy to share your memories.

Send flowers to the Baker family.