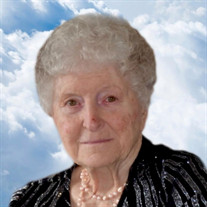 Betty M. Moldenhauer, age 96, of Huntington, died Monday, April 1, 2019 in Indianapolis, where she resided for the past six years to be closer to her children. Visitation will be from 2 – 4:30 p.m. Saturday, April 20, 2019 at Bailey-Love Mortuary, 35 West Park Drive, Huntington, Indiana. A memorial service will immediately follow at 4:30 p.m. Saturday at Bailey-Love Mortuary. Betty was born on July 25, 1922 in Clear Creek Township, the daughter of William and Mary Catherine (France) Lahr. She married Earl Moldenhauer and they were married for 72½ years. Betty was responsible for managing all of the business activities of Moldenhauer Orchards and Nursery, including payroll, ordering, invoicing, tax filing, and daily operations. Aside from her business pursuits, she sang in the Huntington County Women’s Club, belonged to Altrusa International, and sang in the choir at St. Peter’s United Church of Christ for 45 years; she was also a trustee and an elder in the church. She and her husband Earl were active Starlite Dancers. Betty was on the board of directors of both the Association of Homes and Riverview Terrace in Huntington, worked with the Red Cross blood mobile, and was on the advisory board of the REMC. Joining in 1971, the local chapter of American Business Women’s Association became her passion. She held offices of president, vice president, recording secretary, corresponding secretary, and treasurer, the latter twice. She was a delegate to two national conventions, and in 1979 she was named Woman of the Year. Betty is survived by her three children, Carolyn (Don) Hardman of Indianapolis, Rosalie (Bill) Hale of Pisgah Forest, North Carolina, and Bill Moldenhauer of Indianapolis. Eight grandchildren and 15 great grandchildren also survive her. Three sisters and one brother-in-law, Mary Alice Shideler, Margery Rupel, and Shirley (Dave) Clapp also survive. Her husband Earl, her parents, and four sisters Lillian Lahr, Edna Bauer, Ruby Eckert, and Martha Weaver, precede her in death. Three nieces and a nephew also precede her in death.

The family of Betty M. Moldenhauer created this Life Tributes page to make it easy to share your memories.

Send flowers to the Moldenhauer family.