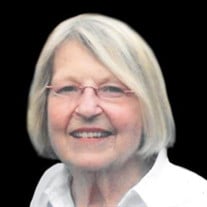 Andrea L., “Andy” McIntosh, danced her way to heaven on June 10th, 2021 at Miller’s Merry Manor in Huntington, Indiana. Upon arrival in heaven, there would have been a can of coke, cinnamon bears, her dog Oliver at her feet, and The Rolling Stones playing in the background. Andy was born June 21st, 1936, to Margaret Brebaugh in Huntington, Indiana. Her younger years were spent on the family farm, usually following along with her beloved Grandpa Felton or playing with whatever puppies she could find. In 1953, she married Doss Fisher. She had her two children, Shana “Sheena” and Doug. She was the best Mom - everyone loved her and her zest for life. She could always be found sun bathing or being the all around cool Mom. She’d have the neatest clothes, anxiously awaiting the newest editions of Vogue or Harpers Bazaar. She later worked for the courthouse doing secretarial duties. Her love and knowledge of the law drew her to meet Judge Mark A. McIntosh, who was always referred to as “himself.” She loved giving advice on legal proceedings, which made him question as to where she matriculated a law degree. All semi-unappreciated law advice aside, he was her life. Their bond was unbreakable and legendary. They married in 1971 and began their years of traveling all over the globe, be it summers at the Dale Hollow reservoir or trips to ski the slopes in the winter. Above all, their hearts belonged to the beach. Topsail Island, NC was their second home. The two of them were blessed with four children, Doug, Shana, Kevin and Philip (deceased). Andy would spend hours walking the beach, collecting the beach pebbles and sharks teeth, while wearing her infamous white scrub pants and long tshirts. She would later become grandmother, where she earned her beloved title of “Mammy” from 10 grandchildren. Babies were the biggest joy to her; her warmth and comfort were just what a baby needed. As she had been the cool mom, she was the cool grandmother. Not many grandkids can bond with their grandma over a can of coke and manchego cheese, but hers did. She’d always be decked out with her Ralph Lauren and her “duck purse.” No matter the situation, her hugs could solve any problem. Her final years were not what anyone would want but she made the best of them. Dementia gave her the biggest fight of her life. She never complained about the hand she was dealt. When her memory faded and her body declined, she maintained her kind soul and sweet disposition. She had a propensity for singing songs like “I love you, a bushel and a peck” or “Dance With a Dolly.” You couldn’t say “left” without her belting out “left! Left” in preparation for a song from her youth. Her language became more colorful as the years went by, flipping between words like bailiwick or sayings about what someone can do with themselves if they’ve treated you wrong. Even in the worst moments of a horrendous disease, she was a class act. Her family is so thankful for the many amazing caregivers she had these last few years. She greeted everyone with a smile and knew no strangers. Numerous people could walk by her room and hear “hey pretty girl!” regardless if they were a girl ….or the maintenance man. Her family asks that after you finish reading this, please go visit someone you’ve been meaning to visit. Time is fleeting so the moments that you create matter. In honor of Andy, be kind, be sincere, and be thoughtful to one another. However, if the need arises, and you can’t hold back, rest assured that Andy had a phrase for that, too! A visitation will occur on June 22nd from 3-7pm at Bailey Love Mortuary in Huntington, IN. If you so choose to donate, feel free to give to The Huntington County Humane Society, The Mark Fisher Scholarship through the Huntington Foundation in honor of her late grandson Mark Douglas Fisher, or The Alzheimer’s Foundation.

The family of Andrea L. McIntosh created this Life Tributes page to make it easy to share your memories.

Send flowers to the McIntosh family.